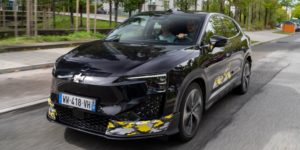 The Chinese manufacturer Aiways has started final testing of the SUV coupé U6 before its market launch in Europe. With only lightly camouflaged prototypes, the results of the development and testing programme are validated in China – for example with high-speed tests on the motorway.

At the Yancheng Zhongqi Research Automobile Proving Ground, more than half a dozen prototypes of the U6 have covered a total of 400,000 test kilometres in the past eight months, according to Aiways. From Munich, further prototypes, only slightly camouflaged, are now undergoing final validations and final test drives.

One of the components being tested is the brake. Since the U6 is supposed to have a “higher acceleration capacity” than the U5, there are higher requirements for the brake system. Accordingly, the second generation of the ‘iBooster’ was developed together with Bosch, which is supposed to provide a three times faster reaction and maximum energy recovery. According to Aiways, the braking distance from 100 km/h measured with the prototypes was 34.4 metres.

In addition to testing, the prototypes are also undergoing a typing and certification programme to enable a rapid market entry in Europe “before the end of this year”. Most recently, the European launch of the U6 was promised for the third quarter of 2022, which would give Aiways about five weeks.

The U6 is Aiways’ second model after the U5 and shares the so-called MAS platform with it. The SUV coupé is not only different in terms of bodywork, but also brings some innovations to the interior and the powertrain. The model has been on sale in China since August and is available there in three battery versions. It is not yet known whether these three versions will also be offered in Europe.

With 160 kW, the U6 has ten kilowatts more power than the U5. Its battery with 63 kWh and CATL cells is only the basis for the U6 (at least in China), above which versions with 72 and 88 kWh are offered. Prices for Europe are not yet known.