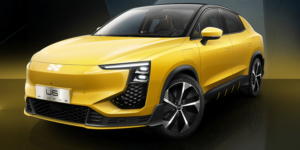 Aiways is now accepting reservations in China for its second model, the U6, which is to be launched in Europe in the third quarter of 2022. However, it is still unclear whether the three battery versions offered in China will also all be available in Europe.

The all-electric SUV coupé with a cW value of 0.26 is powered by a 160 kW engine. According to Chinese media reports, the U6 will be available in China with three battery variants (63, 72 and 88 kWh), which will provide a range of 503, 580 and 650 kilometres, respectively, according to Chinese standards.

As a reminder, the only Aiways model available in Europe so far, the technically closely related U5 electric SUV, is only offered with the 63 kWh battery. Aiways also relies on cells from CATL for the two new battery versions and also uses the cell-to-pack technology of the Chinese battery giant.

Originally, the U6 was supposed to be on the market as early as 2021, also in Europe. The first test specimens were already built in June last year. Later, the premiere of the U6 was repeatedly postponed, first to the beginning of 2022 and then to the third quarter.

Aiways has just launched the second model, the U6, in China. The all-electric SUV coupé costs from 219,900 yuan, around €31,350. Aiways opened sales with the 160 kW electric vehicle and two battery options of 63 and 72 kWh capacity.

The third battery version with 88 kWh, announced when reservations opened in August as above, has yet to come available.

In September, Aiways started the U6 final testing before the market launch in Europe as reported.