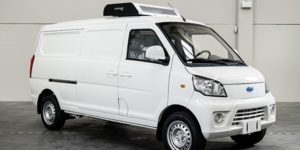 This solution for emission-free frozen and fresh food transport in urban areas is available for the company’s Logistar 200 and Metro series. The Cenntro Metro is the model that has been marketed in Europe as Tropos Able in the meantime, i.e. a small L7e transporter. The Logistar 200 is a 4.77-metre-long electric transporter with a load volume of up to 6.9 cubic metres and a payload of one tonne.

The refrigerated bodies are also two completely different models and adapted to the respective vehicles. For the Logistar 200 Transporter and Logistar 200 Cargo, a model called CT F3 is offered, which has a 48-volt lithium-ion battery with ten kW of power. The refrigeration body for the Metro is called CT U2 and comes with 24-volt system voltage and 5.5 kW of power.

Importantly, both cooling systems have their own battery. This means that the cooling system also works when the vehicle is parked. In addition, the cooling has no influence on the vehicle’s traction battery and thus on the range. The roof of the cooling box can be optionally upgraded with flexible solar cells. Delivery times are between nine and twelve weeks, says Cenntro.

“Sustainable inner-city logistics requires a mixture of measures, which go beyond the drive technology,” says Alain van Münster, Vice President Sales EMEA. “Using our eco-system, which consists of electric utility vehicles and innovative bodywork structures, we can meet the requirements of a wide range of different sectors. At the same time, we’re making an important contribution to the globally established climate goals and reducing the logistic sector’s CO2 footprint in the long term.”

The Cenntro models were not the only electric vehicles with a self-sufficient cooling solution at the IAA Transportation. Also one of the converted ID. Buzz, which VW Commercial Vehicles exhibited at the trade fair in Hanover, is equipped with a cooled cargo area. However, the company Wükaro has integrated a 230-volt system that also uses four of its own batteries. For six to eight hours, the body can keep frozen food refrigerated.

Mahle to invest in Michigan factory