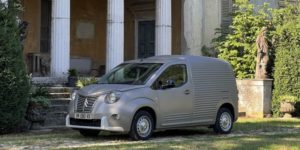 Italian coachbuilder Caselani has transformed the Citroën Berlingo into a retro van in the style of the 1950s 2CV AU. Like the standard Berlingo model, the Berlingo 2CV Fourgonnette will also be offered with an all-electric drive and marketed by Caselani, officially licensed by Citroën.

According to Citroën’s parent company Stellantis, the electric van in retro style is the work of the design teams of both the French carmaker and Caselani. The conversion has involved converting the body with design borrowings from the 2CV AU, for example, the shape of the radiator grille, the eye-catching round headlights and the particularly striking sheet metal dress of the “box duck”, which is characterised by grooves.

As far as the technology is concerned, the data for the Berlingo body version M, i.e. the 4.40-metre-long model, remains the same. For the conversion, which is available in both a fossil-fuelled version and a version with a purely electric drive. The electric motor on the front axle has an output of up to 100 kW, and the energy content of the battery is 50 kWh.

Orders will be possible from 1 October, production is scheduled to start in January 2023. So far, neither company has revealed further information on prices and production volumes. The start will be made by the panel van model (because the historic base 2CV AU was nothing else), but there are also plans for “a leisure version for passenger transport” in the retro look.

The Citroën 2CV AU (‘U’ for ‘utility’) was launched in 1951 as a panel van offshoot of the 2CV A. In just three years, until its successor 2CV AZU arrived, the French company managed to sell over 1.2 million units.

“The design specifications did not involve simply copying the forms of the old van in the strictest sense, explains Caselani designer David Obendorfer. “Instead, they involved going back in time and bringing its unique charm to 21st-century vehicle.”

“As a distant descendant, Berlingo was completely designed as a tribute to the Citroën 2CV of the 1950s. It was an exciting challenge because the original van had completely different proportions. It had very short front overhang, nice long bonnet and visually stand-alone load compartment, very different features from those of Berlingo.”

The designer came up with a solution to this challenge, saying: “I focused more on an overall evocative aspect of the original vehicle rather than straining the individual design elements to make them look like the 2CV Fourgonnette.”