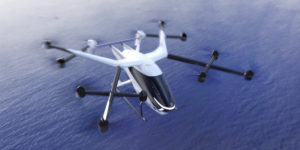 The Japanese company SkyDrive shows the design of its electric aerial taxi SD-05, which is currently under development and is to be used at the World Expo 2025 in Osaka. The SD-05 is a two-seater, electrically powered air taxi designed for flights up to about ten kilometres.

Two years ago, SkyDrive already conducted a public manned flight test with its single-seat predecessor SD-03. The SD-05 is now a two-seater. The airframe is based on “studies of the streamlined shapes of birds and animals”, the company says. Both horizontal and vertical tailplanes are designed to provide stability in flight. The lift and propulsion are provided by twelve motor-propeller units.

With regard to the development and production of the battery system for the SD-05, SkyDrive chose Electric Power Systems as its technology partner in the summer. The US supplier has numerous battery systems “that are currently being used in demonstration devices”, it said in July. EP Systems is currently working with the US Federal Aviation Administration (FAA) to certify batteries for general aviation aircraft. The aim is to have the first TSO (Technical Standard Order) in 2023.

For its part, SkyDrive is in talks with the Japanese Ministry of Land, Infrastructure, Transport and Tourism (MLIT) to obtain type approval for the SD-05. It would be the first of its kind in Japan.

SkyDrive is headquartered in Toyota City, Aichi Prefecture, and defines itself as a developer and manufacturer of flying cars and cargo drones. This month, the company opened its first office outside Japan: In the USA, SkyDrive now also offers air transport solutions for the last mile.