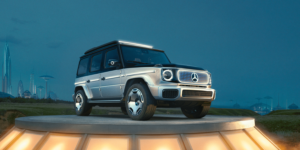 Mercedes-Benz is planning the market launch of the all-electric G-Class in the period from mid to late 2024, as CEO Ola Källenius has now told journalists. In addition, the premiere date for the EQE SUV has been set.

Specifically, Källenius stated that he had driven a prototype of the electric G-Class in Graz in the late autumn of 2021 – on the same test tracks where Mercedes engineers usually test the combustion engine G-Class. It was “probably the most fun” he had had all year, said the Mercedes CEO. The drive had convinced him: “From now on, off-road driving will be electric.”

Källenius, however, did not yet give any details about the model’s technology or its name. Last year, Mercedes presented the Concept EQG at the IAA – if this naming scheme were to continue, the production model would be called EQG. Only a few changes were made to the appearance of the G-Class. It remains to be seen whether the production EQG will also receive such changes or whether the design will remain as close as possible to the combustion models.

At the premiere of the concept, there were only a few details about the drive technology. The Concept EQG (and probably also the later production model) has four motors mounted close to the wheels. For this, the rigid axle at the rear had to be redeveloped to accommodate the electric drives. At the front, this was somewhat easier with the independent wheel suspensions. For off-road driving, each of the four electric motors has its own gearbox to be able to switch to a “low range mode” – analogous to the reduction gearbox of a combustion engine off-road vehicle.

As reported, the silicon anode cell chemistry of the Californian company Sila Nanotechnologies will be optionally available for the EQG for the first time. It is not known what the key data of such a battery might be and which cell chemistry will be installed in the basic EQG.

Meanwhile, Mercedes-Benz has announced the date for the presentation of the EQE SUV. The SUV offshoot of the all-electric EQE will celebrate its digital world premiere on 16 October 2022 at 8 pm.