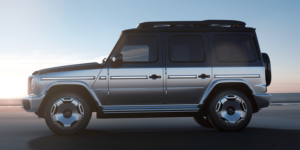 At the IAA Mobility, Mercedes presented a near-production study of an electric G-Class. The Concept EQG is even supposed to surpass the legendary combustion engine model in some areas of off-road capability. For customers with an affinity for luxury, on the other hand, Mercedes is presenting another study in Munich.

The fact that there will be a purely electric version of the G-Class was already apparent at the premiere of the current “G” series in 2018. At that time, Arnold Schwarzenegger, who himself owns an electrified G-Class from Kreisel Electric, wrung the promise out of the then Daimler CEO Dieter Zetsche that the G-Class would also be electrified.

Although Zetsche’s successor Ola Källenius has broken with some of his predecessor’s decisions (such as focusing on battery-electric models instead of continuing to develop fuel cell cars in parallel), the current Daimler CEO is making good on the promise of an electric G-Class at the IAA Mobility – albeit “only” with a near-production preview.

The EQG still bears the name “Concept”, but the look of a G-Class will not be changed at Mercedes anyway. The technically completely new generation of 2018 has been developed even more carefully than a Porsche 911, so the angular design and the round headlights are also retained in the EQG. However, it also has to incorporate some typical EQ design elements, such as the black panel element instead of the radiator grille of the combustion models. In the Concept EQG, the black panel grille is still framed by a surrounding light strip.

However, there is a deviation from the familiar G-Class design at the rear: instead of the usual spare wheel cover, there is a lockable box with white illuminated accents at the rear door, the design of which is intended to be reminiscent of a wallbox – for stowing charging cables, for example. “With the new EQG, we are embarking on a journey into the future. This vehicle combines state-of-the-art off-road capabilities with the age of electric mobility we are all heading into,” says chief designer Gorden Wagener. “For us, it was essential to really keep the DNA of the G-Class, but beam it into the EQ era: like the G-Class, but different.”

The electric drive is also different: the Concept EQG (and probably also the later production model) has four motors mounted close to the wheels. For this purpose, the rigid axle at the rear had to be redesigned to accommodate the electric drives. At the front, this was somewhat easier with the independent wheel suspensions.

Since each electric motor can be controlled individually, this should ensure “unique driving characteristics” both on and off the road, as Mercedes writes. To meet the “high ‘G’-specific off-road performance requirements”, the motors also have a shiftable gearbox for a “low range mode” – i.e. analogous to the reduction gearbox of an internal combustion off-road vehicle, only four times. Since the electric motors also provide their maximum torque practically with the first revolution, Mercedes hopes that the study and the later production model will have “enormous pulling power and controllability”.

The battery of the Concept EQG is integrated into the ladder frame of the G-Class and, with its low centre of gravity, should offer further advantages off-road. Daimler did not provide any technical data on the battery or the performance values of the four engines at the presentation of the concept car – after all, the development of the series production model is not yet complete.

On the way to the production model, the EQG will also have to face the legendary test track on the 1,445-metre-high Schöckl mountain in Graz, which is considered particularly challenging in the off-road scene with steep gradients of up to 60 degrees. We are eagerly awaiting the results – as Mercedes is already announcing that the EQG is to “even further expand the off-road capabilities of the G-Class in some areas”.

Even if the EQG will certainly be anything but a renunciation model: Those who value even more luxury may be more attracted by the Concept Mercedes-Maybach EQS. This IAA study is not a Maybach version of the EQS electric sedan, but a preview of the EQS SUV with Maybach equipment.

The SUV concept vehicle based on the EVA2 electric luxury class platform thus not only provides a preview of the first electric Maybach, but also of the upcoming EQS SUV. The unique vehicle presented in Munich shows Maybach-typical identifying features such as the two-tone paint, but above all wants to convince with its comfort in the interior. According to Mercedes, the space in the rear in particular should become “a comfortable place to work or rest thanks to executive seats and the chauffeur package”. Exclusive details such as sideboard-look door panels, white piano lacquer and materials in deep-sea blue are intended to “create a feel-good atmosphere on board like that of a noble yacht”.

“Many of our Mercedes-Maybach customers are digitally connected to a high degree and place the highest demands on our digital solutions. They also expect the brand of their choice to stand up for sustainable values and take responsibility for the environment,” says Sales Director Britta Seeger. “The Concept Mercedes-Maybach EQS fulfils all these points and embodies sophisticated luxury in a more progressive way. The all-electric powertrain not only enables consistently sustainable mobility, but also a new level of peace and relaxation for passengers.”

Mercedes is not yet giving details of the Maybach SUV’s technology or a possible market launch.