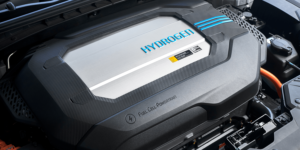 Hyundai is looking to transform the island of Jeju, South Korea, into a hydrogen showcase. 1,700 fuel cell vehicles will eventually operate and refuel on Jeju once the works are completed by 2030. The project is part of Korea’s bid to become a hydrogen economy.

Already having detailed the plant, Hyundai wants to deliver 1,200 passenger cars, 200 garbage trucks and 300 public transport buses within the decade. At present, however, there aren’t any fuel cell vehicles in Jeju because there is no infrastructure. At the same time, the Jeju government aims to be carbon neutral by 2030.

Hyundai, therefore also wants to install H2 refuelling stations on the island starting next year with portable hydrogen charging stations for its flagship FCEV Nexo. Fuel cell buses will also enter the island in 2023, while a large green hydrogen production plant is planned for 2026.

Hyundai works with the Trade Ministry of Jeju Special Self-Governing Province and Korea Southern Power Co. to build a plant capable of electrolysis, i.e. hydrogen generated from renewable power sources like solar or wind energy. The Jeju Government has already announced a 62-billion-won ($43 million) investment for such a facility in eastern Jeju City and hopes to produce 1,176 tons of green hydrogen by March 2026.

As for Hyundai, it is not the only such project the Group is involved in. A few days ago, news broke of 1,000 hydrogen buses coming to Busan to support the bid of South Korea’s second-largest city to host the 2030 World Expo supported by Hyundai.

Last year, the Hydrogen Economy Committee, chaired by the South Korean prime minister, announced a plan for fostering a hydrogen industry. Since then, local conglomerates, including Hyundai Motor and SK Group, pledged a combined 50 trillion-won investment in hydrogen by 2030.

Ionity to cooperate with &Charge