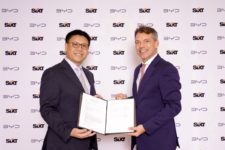 Sixt and BYD have concluded a long-term agreement that guarantees the rental company access to up to 100,000 BYD electric cars over the next six years. Starting now, Sixt expects BYD to provide the first EVs in Q4 2022, in synch with the Chinese manufacturer’s launch in Europe.

The cooperation starts with an initial order from Sixt for “several thousands” of pure-electric cars, according to the companies. BYD confirmed the first model as the Atto 3, the only one of their three models headed for Europe using the company’s proprietary EV platform 3.0. The Tang EV and Han EV derive from ICE cars.

The Atto 3 sits on an 800-volt platform with LFP cells, measures 4.45 meters and has a 150 kW electric motor on the front axle. The 60.5 kWh battery claims 420 kilometres in WLTP testing and recharges in about half an hour. Sixt considers the EV “an expressive and dynamic C-segment SUV”, which BYD prices at €38,000.

Launch markets for the new electric fleet are Germany, France, the Netherlands and the UK. Sixt and BYD have yet to detail when the two larger models, Han and the seven-seater Tang, will join the Sixt portfolio. On sale, prices start at €72,000.

As for future BYD models amounting to the fleet of 100,000 Chinese electric cars, none of the companies has yet made a statement. At the same time, Sixt and BYD reportedly want to “explore additional cooperation opportunities for a sustainable future in different regions around the world”.

Vinzenz Pflanz, Sixt Chief Business Officer, said, “With over one million units produced from January to August 2022, BYD is the world’s largest vehicle manufacturer in the area of eMobility. The agreement with BYD is an important milestone to deliver on our promise of putting significantly more e-cars onto the street.”

Michael Shu, General Manager and Managing Director, BYD Europe, added that Sixt was “a very important key partner to BYD as we take our first steps into the rental market.”

The Chinese manufacturer last week confirmed expanding its European base. BYD is already present in Norway and said it would deliver electric cars to Germany, Sweden, Denmark, the Netherlands, Belgium and Luxembourg next, before entering France and Great Britain this year.