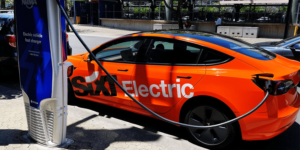 Rental car company Sixt is intent on decarbonisation. The Management Board approved a sustainability programme to increase the share of bookable electric and hybrid cars in Europe. By the end of 2030, up to 90 per cent of the rental fleet could be electric; however, not quite.

Sixt counts not only fully electric cars but also plug-in and even mild hybrids in their effort. Still, the targets remain largely concrete, with Sixt wanting to offer 20 BEV and PHEV cars available to rent this year. By late 2023, the share of low-emission vehicles shall be twelve to 15 per cent before building up to said 70 – 90% share in 2030.

Since the mix remains open, it is unclear how many all-electric cars the fleet will ultimately comprise. As for the models, Sixt names a range of Audi, Opel, Renault, BMW, Peugeot, and Tesla vehicles in today’s statement.

The company also quotes market research by TNS. Around 70% of Sixt customers surveyed responded that using a rental car helps to reduce reservations about e-mobility concerning range anxiety, for example. Nearly two-thirds see the use of rental cars as an excellent opportunity to get to know electric vehicles, and for more than 55%, prior use of an electric rental car is important or very important in making a purchase decision in favour of such a vehicle.

Founder and CEO Alexander Sixt concluded,” Since every rental of an e-car is a paid test drive, Sixt will accelerate enthusiasm for e-mobility. But even more is at stake: by offering a combination of a wide variety of electric vehicles, easy access to area-wide charging infrastructure and our company’s climate neutrality, we want to be pioneers for a sustainable future.”

He here refers to investing 50 million euros in charging infrastructure at Sixt stations, a plan the company has followed for some time.

What is new is that drivers of the new ULEVs will also get access to most public charge points through a charging service. Sixt will integrate it into the app by expanding its mobility platform Sixt One into a single sign-on. This currently comprises over 300,000 charge points, with Sixt aiming to integrate all public networks in countries the company is active in Europe.

Sixt is no stranger to electric vehicles

Sixt has been an early enough adopter of e-mobility and ran a number of electric vehicles such as the BMW i3, the BMW i8 and other hybrid cars. They also made an early deal with Tesla for leasing the Model S in Germany. Sixt had also been a longstanding partner of BMW’s DriveNow service. With the merger of DriveNow and Daimler’s Car2Go, however, BMW bought back all shares from Sixt for 209 million euros in 2018.

In October 2021, the company also launched low-emissions options via Sixt Ride for business customers, as reported. At the time, Sixt claimed that around a third of the fleet consisted of electric vehicles, including e-scooters and e-mopeds to share.

Apart from Sixt share and Sixt rent, there is also Sixt ride and Sixt+, so the company with headquarters in Germany is covering car and commercial vehicle rental, car sharing, ride-hailing and car subscriptions.

In December 2021, Sixt reportedly entered Australia and started offering electric cars from the start, however, also not exclusively.

1,000 hydrogen buses in a bid of Busan to become next eco-city