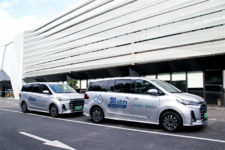 SAIC Maxus has released 80 fuel cell minivans in Shanghai through Xiangdao Chuxing, a SAIC mobility platform. The hydrogen-powered Maxus Mifa forms part of a growing FCEV line-up bolstered by support from the Chinese government. Toyota, too is trying to make a stand in China.

As for SAIC, the Chinese vehicle-making giant announced in 2020 to launch at least ten fuel cell models by 2025. The Maxus Mifa now entering Shanghai relies on the Qiyuan P390 system developed by Shanghai Hydrogen Propulsion Technology. It is SAIC’s subsidiary for fuel cell stacks and systems.

The seven-seater Mifa comes with a 92-kW fuel cell stack and 70Mpa stored hydrogen coupled with what SAIC calls a “three-in-one” bridge, allowing a 6.4kg hydrogen cylinder to be refilled within only three to five minutes. One hydrogen refuelling session results in a range of 605 km. Besides, the model’s hydrogen consumption is only 1.18kg per 100 kilometres, says SAIC.

The roll-out through Xiangdao, a service similar to Uber, enables clients to choose “business-type” vehicles when hailing rides and to experience hydrogen, sometimes for the first time. SAIC also quotes a driver who has been on the Xiangdao platform for many years, saying, “From a fuel vehicle to an electric vehicle, when I hear that the platform has a hydrogen energy vehicle, it takes five minutes to refuel. If I can run 600 kilometres, I immediately apply.”

On the governmental level, the Shanghai-based manufacturer can count on the support of both local and federal politicians. The Shanghai city government wants to take the lead within China in commercialising fuel cell vehicles and has been working with SAIC on FCEV light buses and hydrogen filling stations. SAIC mentions China’s “double carbon” goal in today’s communication. The country aims to reach the peak before 2030 and carbon neutrality by 2060, banking on new energy vehicles, green energy and other turnarounds.

Toyota is taking a similar path to SAIC and announced on WeChat last week that it would put 111 Mirai fuel cell cars into a pilot trial for short-term rental and ride-hailing services in cities such as Beijing, Shanghai, Guangzhou, and Foshan.