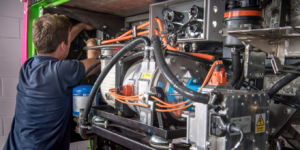 In the UK, public transport provider First Bus is partnering with conversion company Equipmake to retrofit 12 of the operators existing diesel buses with electric drives. The buses are to be converted and operated in the York region.

The single-decker Optare Versa buses from First Bus are to be fitted with Equipmake‘s scalable modular Zero Emission Drivetrain (ZED), which the company says is also suitable for double-decker buses.

The conversion company says that each converted bus will end up with a range of 150 miles (approx 241 kilometres). Eqipmake says it converts vehicles to the specific requirements of the operator, which can cater to driving ranges of up to 25o miles with a larger battery. For this conversion contract, the 150-mile range is said to be enough for the York buses that can then be recharged overnight at the depot.

The first bus is already being converted. After trial runs, the remaining 11 buses will also be electrified. The delivery of the first vehicle is scheduled for November this year.

Garry Birmingham, Director for Decarbonisation at First Bus, said: “The retrofitting of our older electric buses is another great example of how we can maximise the lifespan of a bus, beyond 15 years, and in addition, significantly reduce the embodied carbon associated with manufacturing new vehicles.”

According to First Bus, each conversion is to cost less than half the cost of a new electric bus. The operator points out that since most buses are in service for 14 years or more, public transport operators can make significant savings by converting a bus halfway through its usable life.

Birmingham explained that the conversions were part of the company’s Zero Emission Mission target by 2035. “These 12 repowered buses use a really clever and cost-effective technology, which underlines our commitment to offer sustainable transport solutions. Nationally, First Bus is committed to delivering our zero-emission fleet goal, and First York’s partnership with Equipmake is a great example of how we can achieve this ambition,” he continued.