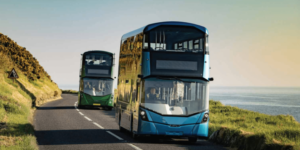 First Bus had successfully worked with five municipalities to rack up the combined order of 193 electric buses. The operator will invest £43m in the new vehicles and will be supported to complete the electric fleet project with a £38m grant from the DfT.

ZEBRA, now in its second round, is to help launch 4,000 zero-emission buses in England by 2025. Transport Minister Baroness Vere called the First Bus order a “key stepping stone” towards said target. “It’s fantastic to see First Bus place the largest ever order of electric buses outside London, thanks to investment from our £270 million scheme.”

The new buses will start running in five cities in England from March 2023. 68 of the nearly 200 e-buses are earmarked for Leicester, 44 for York, 34 for Portsmouth, 32 for Leeds and 15 for Norwich.

While First Bus has not supplied specifications, we know that the single-deck bus can be equipped with lithium-ion batteries with an energy content of 340 kWh, 454 kWh or 567 kWh and is supposed to travel up to 300 miles (about 483 kilometres) with the largest battery pack. Wrightbus specifies the DC charging power at 150 kW, optional opportunity charging via pantograph at 450 kW.

First Bus has not commented on charging. However, in Glasgow, they run the UK’s largest charging depot set up with Heliox, as reported. However, the Scottish depot is for buses built by ADL-BYD.

Still, opting for Wrightbus is also in line with ZEBRA funding requirements since the vehicles must be made in the UK. The buses for First Bus will be made at the Wrightbus plant in Ballymena, Northern Ireland.

And the bus builder is busy. Recently, Wrightbus also signed a framework agreement with Ireland’s National Transport Authority to supply up to 800 battery-electric double-decker buses over five years. Regional Transport Cologne (RVK) had also awarded Wrightbus a contract for 20 guaranteed and 40 optional hydrogen-powered buses, as reported.

First Bus expects Wrightbus to complete deliveries within the next two years. First Bus will have more than 500 electric buses operating across the UK.