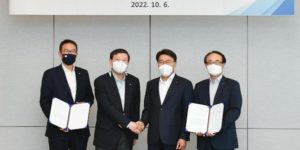 The South Korean materials group Posco has signed an agreement with GS Energy that is expected to result in the establishment of a joint venture for recycling spent batteries before the end of this year.

GS Energy is a subsidiary of the South Korean GS Group. According to a report in the Aju Daily, 51 per cent of the shares are to be held by Posco Holdings, which means that the steel manufacturer will have a majority stake in the joint venture. The two companies plan to invest a combined 170 billion won (122 million euros).

Posco started as a steel manufacturer but has been investing in building a value chain of battery materials for several years in order to broaden its business model. Posco has so far focused mainly on cathode materials and lithium hydroxide, but this year the company’s first recycling plant also went into operation: In Poland, Posco crushes spent batteries into black mass. This black mass is then supplied to Posco HY Clean Metal, another joint venture between Posco and Chinese company Huayou Cobalt.

It is not yet known which steps of the recycling process the planned joint venture with GS Energy will map. In the announcement, Posco CEO Choi Jeong-woo said the company aims to build a “new industrial ecosystem related to secondary battery recycling.”