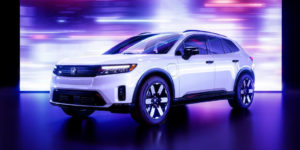 Honda has now revealed the first glimpse of the interior and exterior design of its first all-electric SUV model. The Prologue will be based on General Motors’ Ultium platform and will be launched in North America in 2024.

Press photos now revealed by the Japanese company show that the collaboration with General Motors has produced a ruggedly elegant SUV. The Prologue electric SUV was announced in June last year. Honda has been somewhat late to the electrification party and is generally better known for its hybrids.

Until now, not much information has been released about the Prologue other than that it will start rolling to first customers in 2024. In the company’s latest announcement, Honda states that it wants to position the electric SUV above the CR-V and alongside the Passport.

The look of this large electric car is the work of the Los Angeles-based Honda Design studio. The Prologue will sport 21-inch wheels and a panoramic roof. The designers describe the vehicle’s lines as modern and confident and the surfaces as clean and simple. The front end is reminiscent of the Honda e, and the rear features the full “Honda” lettering instead of just the “H” logo.

“Our goal was to create a clean harmony based on a rugged SUV image by coordinating the colours and materials to express neo-rugged design styling that’s familiar to our customers and uniquely Honda,” said Masaki Sumimoto, design lead for the Color, Materials and Finish.

Inside, the Prologue will have the standard feature of an 11-inch driver display and an 11.3-inch audio and connectivity display. The dominant interior colours are anthracite and light grey. Honda plans to announce more details about the Prologue in the next few months.

The manufacturer announced in mid-2021 that there would be a BEV based on the Ultium platform from General Motors, and earlier this year, the two companies promised affordable EVs on the Ultium platform. The cooperation between Honda and GM was sealed in September 2020. Part of the deal between the two corporations is that GM will manufacture the jointly developed electric models for the Japanese company. Next up for the collaboration with the US-American carmaker is the purely electric model from the Honda brand Acura which will also be based on GM’s Ultium platform. It looks like the Honda Prologue will be produced from 2023 onwards in Ramos Arizpe, Mexico, and the Acura electric car should start production in 2024 in Spring Hill in the US state of Tennessee.

Honda is also betting on an all-new electric platform of its own called e:Architecture to take over in the second half of the decade. However, until the BEV era begins at Honda, more “core models will first be equipped with hybrid systems to further reduce CO2 emissions and introduce customers to battery-electric production vehicles currently under development”.

In China, the Japanese company is taking a different strategy. In October 2021, Honda presented its first electric SUV for the Chinese market. The company has also revealed three futuristically designed concept studies.

Honda has repeatedly emphasised its strategy of guiding customers to all-electric vehicles via hybrids. Honda is now saying that its own research shows that hybrid customers are among the first to switch to all-electric products. Nevertheless, studies show that large hybrid vehicles do little to reduce CO2 levels in the atmosphere. In the USA, Honda says it plans to increase the CR-V’s model mix to 50% hybrid sales in 2023 and offer CR-V Hybrid customers in electric car-savvy states in a shorter two-year term. “This will allow customers in target markets to easily switch to a Prologue when the new electric vehicle is launched in 2024. In this way, the company’s increasing hybrid sales will help build a future EV customer base,” the company reasons.