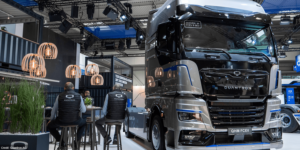 The German truck maker and conversions specialist Quantron AG will soon be offering its zero-emission commercial vehicles and retrofit packages in North America. The company has founded an offshoot named Quantron US and appointed Richard Haas as its CEO. Focus will be accorded to fuel cell trucks.

The company based in Augsburg intends to implement its business model of providing zero-emission vehicles and matching services in the USA. Quantron also says it plans to locally develop new commercial vehicle designs with BEV and FCEV powertrains. The German truck maker says the decision to expand was prompted by a number of enquiries from US fleet operators.

The existing partnership with the Canadian fuel cell expert Ballard Power Systems is to serve as a springboard into the new market where Quantron is specifically eyeing the long-distance FCEV segment. Here, the company wants to focus strongly on hydrogen solutions for long-distance transport such as Class 8 trucks, with the ambition of becoming one of the pioneers in this field in the USA. The company wants to achieve around 50 per cent of sales in the North American market by 2025.

Richard Haas will head the new US subsidiary. Haas was most recently Managing Director and CEO at Mahindra Automotive North America and previously, among other things, Director of Engineering for the Tesla Model S as well as having worked for Ford for a long time. The position of Chairman of the Board at Quantron will be filled by Raymond F. Staples who will be in charge of the development of the service area “Quantron-as-a-service” in North America.

Michael Perschke, board member and CEO of Quantron AG explained: “The establishment of a subsidiary in the USA is an important step towards our goal of putting zero-emission vehicles on the road worldwide. In Europe, nearly 100 Quantron-converted vehicles are already successfully in use.” He elaborated on the plan in North America saying. “For the USA, we see potential of a triple-digit volume annually in the first few years.”

The company is counting on the announced US funding to establish regional centres for clean hydrogen throughout the country, which should propel the entire industry forward. “These H2Hubs are a once-in-a-generation opportunity to lay the foundation for the clean hydrogen future President Biden is building—one that will lift our economy, protect the planet, and improve our health,” said U.S. Secretary of Energy Jennifer M. Granholm.

The German company has made bold moves on the international stage recently. Apart from the announcement that the company is working on a hydrogen fuel cell truck with a 1500-kilometre range, the company also recently announced a cooperation with the Indian company ETO Motors. Under this partnership, ETO Motors is to support Quantron in the development and registration of its trucks, vans and buses in India and other countries on the Indian subcontinent, and will also become the sole sales partner for all Quantron vehicles and technologies in the territory. In return, Quantron will support the Indian company in bringing its three-wheeled vehicles to the European market.