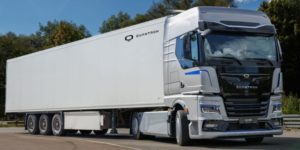 At the IAA trade show, Quantron presented the QHM FCEV Heavy Truck created with Ballard Power Systems, a tractor unit for heavy long-distance transport with a range of up to 1,500 kilometres. Quantron also displayed other fuel cell and battery commercial vehicles on its stand at the trade show.

The QHM FCEV features Ballard’s newly developed FCmove-XD 120 kW fuel cell and Allison Transmission’s integrated e-axle eGen Power 130D. An optional aerodynamic package is also available for all variants of the QHM FCEV, which, according to the manufacturer, improves the range by another ten per cent. Each vehicle has two Ballard fuel cells installed in each vehicle, giving the FC system output of 240 kW.

The QHM FCEV 44-1000 is the basic model. It has hydrogen tanks fully integrated into the chassis with a capacity of 54 kilograms, which should result in a range “of around 700 km depending on the load and topographical requirements”. The company says that other components of the drive are also within the frame structure and meet the legal requirements. Since the vehicle fulfils the ISO guideline for semi-trailer combinations, the “interchangeability of semi-trailers and tractor units on a national and international level” is also to be guaranteed. In other words, the vehicle can be used for all the same applications as a diesel truck.

All variants are united by the long-distance driver’s cab, the 400 kW E-axle (550 kW peak power), a 118 kWh battery and the intelligent Q-ENERGY management system to reduce H2 consumption. The system controls the interaction between the E-axle, fuel cells, high-voltage battery and 24V and HV auxiliary consumers. The QHM FCEV is available to order now, with the 1000 model to be delivered from the second quarter of 2023, and the two 2000 models to follow in Q3.

As another world first, Quantron is presenting a battery-electric heavy-duty truck platform: the QHM BEV is available as a tractor unit QHM BEV 44-400 as well as a chassis QHM BEV 27-400 in a wide range of variants. The battery, which can hold up to 392 kWh, can be charged with power of up to 350 kW DC and offers a range of up to 350 kilometres. In less than an hour, the battery is said to be able to be charged from 20 to 80 per cent. As for the maximum engine power, Quantron specifies 375 kW. Both variants are available as 4×2 and 6×2.

With the QLI FCEV, Quantron is also showing a light truck with Ballard fuel cell drive and ranges of up to 500 kilometres, as well as the QLI BEV as a van from 3.5 to 7.2 tonnes.

Ballard has taken its involvement in the developments seriously, backed up with earnest investment: Just a few days ago, Quantron successfully closed an A-financing round of up to 50 million euros after a seed round in March 2021. Investors include German machinery and equipment manufacturer Neuman & Esser and Canadian fuel cell technology group Ballard Power Systems.

In April this year, Quantron revealed a light electric truck and an electric tractor unit. The Qargo 4 EV Light Truck was the second vehicle in the brand’s new design. Although Quantron started out as an electrification converter for existing vehicles, it is increasingly developing into a full-range supplier of electric commercial vehicles. In February, the company based in Gersthofen near Augsburg presented its first own electric bus, the Cizaris 12, which is based on a chassis from partner EV Dynamics, but was adapted for the European market by Quantron.