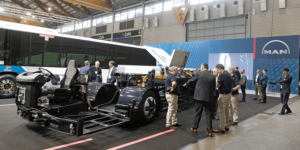 MAN Truck & Bus has presented a fully electric bus chassis for the global market. The Lion’s Chassis E is based on technologies from the MAN Lion’s City E electric bus model and is scheduled to roll off the production line at MAN’s Polish plant in Starachowice from 2024 onwards.

MAN has chosen the Australasia Bus & Coach Expo trade fair in Sydney as the venue for the world premiere. The Traton subsidiary, which is part of the Volkswagen Group, already announced its intention to present the chassis to global markets earlier this year.

This is primarily because the launch of the Lion’s Chassis E is aimed at markets beyond Europe. Rudi Kuchta, Head of Business Unit Bus at MAN Truck & Bus, describes the electric chassis as “MAN’s electric bus solution for the international markets in order to provide customers outside Europe with emission-free solutions”. The manufacturer says that for the market entry, it wants to work together with a worldwide network of body manufacturers “in order to be able to serve local customer requirements in Asia, Africa, South America, New Zealand and Australia in the best possible way”.

The Volkswagen subsidiary is offering two battery alternatives for its electric buses: In addition to the NMC batteries familiar from the Lion’s City E, there will also be LFP batteries. The German bus and truck makers say that this is to meet the sometimes enormously different requirements of international bus companies in terms of daily range, total kilometre performance and costs.

MAN plans to deliver the first demonstration vehicles in 2023 and test the performance of the chassis in possible target markets, where the company specifically mentions Australia. The Lion’s Chassis E will then go into series production in 2024 in Starachowice, Poland, where the Lion’s City E has also been manufactured since 2020. “The experience our employees have gained in development and production around our e-bus and its series production will of course be incorporated into the production of the electric chassis,” says Kuchta.

Crinel Geaboc, Head of MAN Bus and Coach at Penske Australia, exclusive MAN partner in Australia and New Zealand says: “This success in Europe combined with MAN’s continued investment in electric technology – such as the construction of a battery factory in Nuremberg – and the strong partnership with Penske on the ground in Australia builds confidence with our customers.”

The batteries will be supplied from Germany. MAN plans to manufacture high-voltage batteries for electric trucks and buses in large-scale production at the Nuremberg site from the beginning of 2025. To this end, the company is pumping around 100 million euros into the tradition-steeped production site for combustion engines over the next five years.