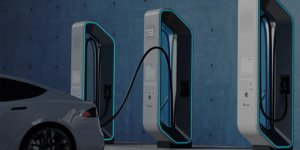 SK Signet, owned by South Korea’s conglomerate SK Group, said it wants to invest $15 million into building its first plant in the USA. The company refers to US funding policies being decisive for coming to Texas.

The funding policies SK Signet is referring to are the Inflation Reduction Act and the National Electric Vehicle Infrastructure (NEVI) program drawn up to subside locally-made EV charging infrastructure. Under NEVI, the US government is offering US$5bn worth of incentives to install a network of 500,000 charging stations across the country by 2030, including rapid charging stations at maximum intervals of 50 miles (80km) on the highways. However, the funding promise includes the demand to have most components sourced or assembled in North America.

Cue in SK Signet and the planned production in Texas. The lines shall start rolling in Q2 2023, then producing 10,000 chargers per year. This is to double to 20,000 units at a later stage.

SK Signet owner SK Group said it would eventually invest $50m in the facility to increase output to meet growing recharging demand from EV owners in the region.

The precursor of SK’s Signet offshoot, founded in July 2022, is the South Korean charging infrastructure provider Signet EV, which SK acquired in April 2021. The company offers chargers for electric cars and buses, focusing on fast and ultra-fast solutions. SK Signet has sold more than 20,000 charging stations worldwide, including around 4,000 in the US.

Apart from SK, other manufacturers have followed suit to adhere to the Made in America standard. Australia’s Tritium has already built an EV charger production plant in the US with endorsement by the White House. Spain’s Wallbox Chargers and Switzerland’s ABB have also announced similar plans.

SK Signet has not formally confirmed the Texas facility but has already established a head office in Tysons, Virginia.

This has now changed as SK Signet announces Texas as the location for its factory in the US. The SK subsidiary has selected the city of Plano, near Dallas, to host the facility covering 136,200 square feet (about 12,653 sqm) once completed in mid-2023.

The company also released details such as the creation of 183 jobs. The workers will produce ultra-fast chargers and power cabinets with more than 350kW of power, so SK Signet. Starting with 10,000 chargers, as reported above, SK now added that it expects the site to be at a total capacity of 20,000 units by 2026.

In addition to manufacturing EV chargers, SK Signet’s Texas facility will house research & development, conduct charger testing with automakers, and manufacture power modules. The latter will help customers customize the size and power of their chargers through ‘Active Power Sharing’, for example, which can deliver more efficient charging across multiple EVs.

The company plans to work closely with state and local officials to recruit and train workers.

Seung-June (SJ) Oh, President SK Signet America, said they were “grateful to the partnerships with federal, state and local officials, particularly those representing the City of Plano, Texas, who have supported and guided our expansion into the US market.”

Mayor of Plano, John Muns, added, SK’s technology was “a perfect fit for our business community”.

SK Signet is another SK Group business increasing activities in the USA. SK On has made a $2.6 billion investment in Georgia for two battery manufacturing facilities. Earlier this year, SK E&S acquired EverCharge, a provider of EV charging solutions based in California, and SK Inc. and SK Energy acquired the management rights of Atom Power, a North Carolina company that’s developed advanced energy delivery systems, including EV charging.