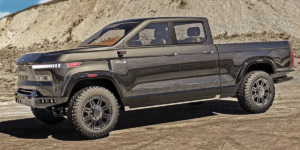 To recapture, AusEV agreed to act as Atlis’ distributor in the Southeast Asia and Oceania region in September 2021. AusEV ordered up to 19,000 units for delivery by 2025. The order became binding this August.

“This is an extremely important milestone for Atlis as it underscores the confidence AUSEV has already placed in the company fulfilling the initial order for 19,000 XT vehicles,” stated Mark Hanchett, Atlis Motor Vehicles’ Founder and CEO.

It remains to be seen if the confidence is well placed. Atlis already faced a one-year delay in production in 2021 and has yet to confirm if or, rather, when, the XT is rolling off the lines. The company was reportedly setting up pilot production in Arizona, USA, last year and may be still at it. In today’s statement, the company said only it was “working toward production of the Atlis XT pickup truck”.

That aside, the new order from AusEV is for 270 of Atlis’ 1.5 MW charging stations. The make is unknown but in line with the newcomer’s goal to provide vehicles, charging stations, and perhaps batteries.

Once fulfilled, the chargers will be independently distributed throughout territories in Australia where the XT vehicles will be deployed, writes the company. The parties also intend to explore the potential for local battery cell production in Australia.

“BossCap is a multi-industry company focused on sovereign capability, and the potential of local battery cell production is a very exciting opportunity for us,” stated Terry Mulcahy, Head of Future Business at the Holding.

Its subsidiary AusEV is an Australian distributor for vehicles remanufactured to right-hand drive and claims to run one of the largest service networks on the continent, focusing on American pickups and muscle cars. The deal with Atlis included providing expertise in compliance and certification and support in service and charging infrastructure for the Australian market from the start.