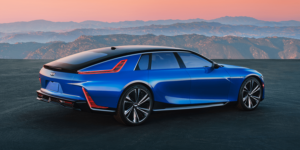 Cadillac has released more technical details on the upcoming Celestiq. According to the manufacturer, the 111kWh battery is capable of supporting a range of up to 300 miles, and the electric vehicle will launch at a price of around $300,000.

The Celestiq was unveiled as a show car in July, the all-electric flagship sedan based on General Motors’ Ultium platform will feature a twin-motor all-wheel-drive system with an output of around 450 kW and a 111 kWh capacity battery that is said to provide a range of 300 miles (approx. 480 km) and can be fast-charged with up to 200 kW. General Motors also adds that the electric vehicle will have one of the quickest acceleration rates in their line up with “0-60-mph accelerations in the segment of 3.8 seconds”.

Charging of the vehicle can be done with up to 200 kW DC fast charging, which can charge an estimated 78 miles of range in 10 minutes at a public DC fast charging station. Customers will also receive access to the Ultium Charge 360 system, which includes access to more than 110,000 publicly available charging points in the United States and Canada.

Production of the Cadillac Celestiq, which will be hand-built in Warren in the US state of Michigan, is scheduled to start in December 2023. Prices will start at a minimum of US$300,000, according to Cadillac. The Celestiq will be Cadillac’s second all-electric model after the Lyriq SUV, which is already available.

General Motors also boasts of their “most technologically advanced suspension and other performance systems ever”. The new systems include everything from adaptive air suspension to active roll control, electric power steering and advanced AWD capacities. A specially designed tyre, which was designed by Michelin, is also included in which “the tread pattern, self-sealing technology and foam inserts enable a quiet tire for greater ride isolation”.

“CELESTIQ is the purest expression of Cadillac, acknowledging our incredible history and driving us to a bolder and brighter future,” said Global Vice President of Cadillac Rory Harvey. “It is a completely bespoke work of automotive art, built around the most advanced and innovative technology that we have ever engineered into an automobile. With an extremely low volume of hand-built vehicles to be offered globally each year and an exclusive declaration process, CELESTIQ will truly be a custom-commissioned one-of-one.”