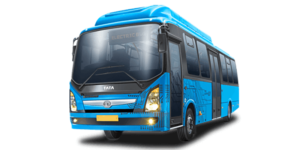 For the deployment of the 200 electric buses, Tata Motors has entered into a strategic collaboration in the twin capital cities of the Jammu and Kashmir regions. The purchase of 150 units of 9-metre and 50 units of 12-metre Starbus electric buses has been enabled as part of an initiative of Housing and Urban Development Department from the Government of Jammu & Kashmir’s initiative for environmentally friendly public transportation.

The 12-metre model, though not described as the company revealed this most recent order, is likely to be the Tata Starbus EV that Tata Motors introduced in 2020. This model offers space for 35 passengers and has air suspension at the front and rear. The electric motor has an output of 245 kW. The battery pack is supposed to come to around 250 kWh but is also supposed to be scalable according to range requirements. For the 9-metre electric bus, no data was given, but this bus is pictured in the photo above.

Decarbonisation efforts for public transport in India have been working in overdrive since the government approved subsidies for 5,600 electric buses in 2019. The FAME II programme (Faster Adoption and Manufacturing of Hybrid & Electric Vehicles) has provided subsidies with a total value of the equivalent of 1.4 billion dollars. According to a previously published survey, $360 million from this budget has gone towards the purchase of 5,000 electric buses.