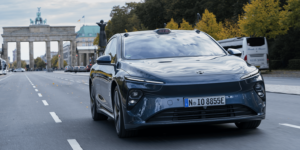 Nio will offer the possibility to not only rent but also buy its electric models in Europe from 21 November. Until now, the business model of the Chinese newcomer only provided a leasing option. According to the manufacturer, the feedback from interested parties has changed its mind.

Nio celebrated the European market launch of its three models ET7, EL7 and ET5 at the beginning of October and announced that it would only offer the trio for rent via its ‘Nio Subscription’ programme. According to the Chinese CV EV Post portal, the company is said to have received enquiries from many interested parties after the event in Berlin, stating that they would prefer to buy the Nio vehicles.

The manufacturer has now reacted to this and announced that it will introduce purchase options for its three electric vehicles in Europe from 21 November. Further details are to be published then. Nio made the announcement via its app. Delivery of the vehicles with the purchase option is to begin in 2023.

It seems somewhat contradictory that the German Federal Office for Economic Affairs and Export Control (BAFA) already had a reported purchase price for the ET7 electric sedan in September: Following an update of the BAFA list of eligible vehicles, it became known on 13 September that the model would be offered in Germany from a gross list price of 69,900 euros. The ET7 can be found in the list in line 660 (as of 24.10.2022), where the net list price of 58,739.50 euros is mentioned – or just with 19 per cent VAT those 69,900 euros.

The other two electric vehicles scheduled for European launch, the EL7 and ET5, do not appear on the BAFA list. Incidentally, the Nio vehicles were offered for sale in China and Norway right from the start.

Tesla lowers prices for the Model Y & Model 3 in China