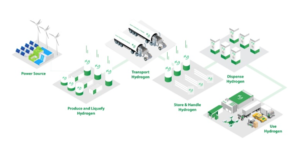 FreezPak Logistics has been a Plug Power customer since 2014, when it first converted forklifts from lead-acid batteries to hydrogen at some sites. The food logistics company decided to convert four more locations to the Plug Power solution, followed by another five warehouses in 2023.

“FreezPak Logistics has been a longstanding believer in Plug’s innovative technology and hydrogen fuel cells,” Andy Marsh, Plug CEO, said. “We are thrilled to expand our partnership, which further improves the American supply chain and decreases carbon emissions.”

According to Plug Power, FreezPak Logistics was able to increase its productivity by 100 per cent because the fuel cell system was able to operate at full power for an entire shift, whereas the lead batteries had to be charged more frequently. In addition, the company has been able to reduce electricity costs by 31.5 per cent and increase floor space by up to 465 square metres per site.

Plug Power says it is in the process of building an end-to-end green hydrogen ecosystem. This ranges from production, storage and delivery to energy generation. Neither company has revealed more information about which forklift model is involved or its technical data.

Plug Power has been an early mover when it comes to hydrogen fuel cell-powered forklifts. Back in 2017, Plug Power gained an order from Amazon for a fleet of H2 forklifts in 11 of its logistics centres. The following year, Plug Power introduced their new GenDrive 2440-36R for electric forklifts. The new fuel cell system calls for larger hydrogen tanks, increased the forklift run-time by 56%.

Plug Power is involved in fuel cell vehicle development and production across transport sectors in so-called hard-to-decarbonize sectors such as aviation, construction and logistics vehicles, and commercial vehicles, including hydrogen fuel cell and electric buses. Plug Power is active in North America, Europe and in Asia with fuel cell systems.