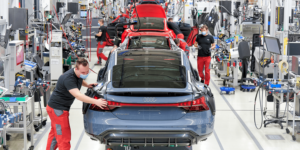 Audi wants to cut the production volume of its combustion engine flagship A8 in Neckarsulm and increase the production number of the all-electric e-tron GT. The plant manager wants to achieve this by shifting personnel to electric vehicle production.

According to information from the local German publication Heilbronner Stimme, the employees affected by the production cutbacks for the A8 will be deployed in the future to manufacture the e-tron GT in the Böllinger Höfe, among other things. “The program adjustment for the Audi A8 will take place at the same time as an increase in the production number of the Audi e-tron GT,” the newspaper quotes plant manager Fred Schulze as saying. In principle, Audi has confirmed the production cutback for the A8 to the newspaper, but has not named any unit numbers.

According to reports, unit production of the electric car will be increased starting in January. Since its launch, Audi has produced more than 15,000 units of the sporty electric car.

Schulze goes on to state that with the ramp-up of production of the e-tron GT “and combined with the intensive preparation for future ramp-ups,” they have enough work for employees at the Neckarsulm plant.

Exactly which models these are is still open in the case of the electric cars. As the “Stimme” continues, behind the scenes both the plant manager and the works councils are lobbying for the all-electric successor to the A8 to also be built in Neckarsulm from the middle of the decade.

The distribution of models to the individual plants is usually determined in the VW Group by the so-called planning round in November of a year. However, the current planning round 71 has apparently been postponed until the beginning of 2023.