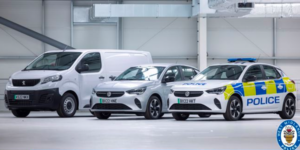 The police in the West Midlands region of England want to procure 68 new electric vehicles by the end of this year. The West Midlands Police already has 40 electric cars and 50 charging points.

According to British media reports, the new electric vehicles, which are to be ordered by the end of 2022, will be a mixture of cars and vans as well as a mix of civilian vehicles and those in police trim. Along with the expansion of the electric fleet, West Midlands Police will also increase the number of its charging points.

Exactly which models are involved, however, is not known. A photo shared by West Midlands Police on Twitter shows a Vauxhall Corsa-e in police livery with a blue light system, a Corsa-e in plain clothes and a white Peugeot e-Expert.

Based on the experience already gained, the police authority is confident that the new models, with their much more advanced technology, will be better suited to the needs than the e-models previously used – which were Nissan Leafs.

“Working with vehicle manufacturers we are confident that the new vehicles will suit our own demands in the future, which will not only be better for the environment but will reduce our overall maintenance costs for the fleet,” says the fleet manager in charge, Gary Mallett.