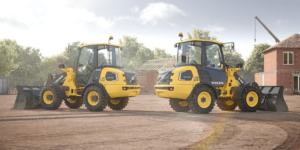 Volvo Construction Equipment has added some technical upgrades to its L20 and L25 electric compact wheel loader models, just as deliveries are starting in North America.

The updates include increasing the maximum speed to 12.4 mph (20km/h), the option to fit a parallel linkage that delivers high breakout torque in various applications, additional operator-friendly features, and improved charging. Additionally, an improved hydraulic pump and relocated main control valve have lowered noise levels both inside and outside of the cab. A programmable cab heater option will also likely prove popular in colder climates, the manufacturer adds.

“As the first commercially available fully electric wheel loaders on the market, the L25 Electric and L20 Electric were already unique. These upgrades take them to another level with improved comfort, productivity and uptime,” said Lars Arnold, electromobility product manager, Volvo CE.

The L25 Electric compact wheel loader was unveiled in 2019 and the company started deliveries in Europe in the spring of 2020 and in North America this past summer. Volvo CE began accepting orders for the L20 Electric earlier this year, and North American deliveries start soon. With the start of the deliveries, the upgraded electric wheel loaders will be brought to customers, rather than the previous variants.

Lately, Volvo Construction Equipment has also been expanding their focus into hydrogen-powered construction vehicles, starting with the joining of the European hydrogen consortium in early 2021. Just a few months later, Volvo CE celebrated the opening of a fuel cell test lab in Sweden, which likely contributed to the newly presented hydrogen fuel cell articulated dump truck presented in June of this year.

Charging of the electric construction vehicles takes only six hours for a full charge with the 6 kW on-board charger if used with a 240V socket or level 2 public charging station. Faster charging is possible with an optional off-board DC fast chargers at 11.5 kW or 17.3 kW.