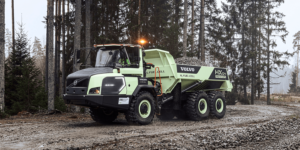 Volvo Construction Equipment (Volvo CE) has started testing an articulated dump truck with a fuel cell system. The prototype of the six-wheeled Volvo HX04 was developed as part of a Swedish research project.

The Volvo HX04 from Volvo CE is now entering testing. The heavy-duty hydrogen fuel cell vehicle is the result of a research project funded by several Swedish authorities between 2018 and 2022. Partners include Volvo CE, RISE Research Institutes of Sweden, which contributed expertise in powertrain development and safety, and PowerCell Sweden.

PowerCell provides fuel cells for a number of marine and land applications in hard-to-decarbonise sectors. In 2019, the German automobile supplier Bosch announced their entry into serial production of fuel cells for which they entered into a cooperation with the Swedish manufacturer PowerCell Sweden for further development and production of stacks.

While Volvo CE already has a number of battery-electric models on offer, it believes researching multiple technologies and working in partnership with companies and institutes is the best way to decarbonise the construction industry. “As the inventor of the world’s first articulated dump truck more than 55 years ago, we are happy and proud to once again drive change with this fuel cell dumper concept,” says Carolina Diez Ferrer, Head of Advanced Engineering Programs at Volvo CE. “Although it is an early prototype, this innovation will provide valuable insights into the possibilities of hydrogen in the energy transition, alongside battery electric solutions.”

Richard Berkling, CEO of PowerCell Sweden AB noted: “If we are to manage the transition, we will need to adopt a large number of different solutions. For heavy vehicles, hydrogen-electric powertrains have the major advantage of enabling electrification with minimal impact on the customer’s operational processes. Driving time, driving range, payload capacity, accessibility and filling time are essentially the same as with diesel-powered vehicles.”