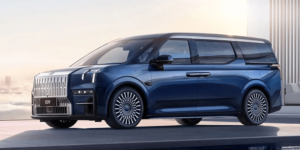 Geely’s premium electric subsidiary Zeekr has unveiled its second model and is now accepting reservations for the Zeekr 009 in China. Separately, Geely plans to spin off Zeekr and list it on the Hong Kong Stock Exchange.

First, let’s talk about the new electric car in the Zeekr portfolio: The Zeekr 009 is an electric van that, like Zeekr’s debut 001, is based on the SEA (Sustainable Experience Architecture) electric platform. Like the 001, the 009 has a 400 kW all-wheel drive and two battery options. However, the battery options are 116 or 140 kWh capacity (in the 001 it is 86 or 100 kWh). Depending on the battery, the manufacturer puts the maximum range of the new model at 702 or 822 kilometres according to Chinese standards. Peak torque is given as 686 Nm, acceleration from 0 to 100 km/h as 4.5 seconds.

As reported, Zeekr is the first electric car manufacturer to use CATL’s series-produced Qilin batteries in the 009. This is the third generation of CATL’s cell-to-pack battery technology, introduced in June. It sets a record for volume-based usage efficiency at over 72 per cent, CATL said. This compares to 50 per cent for the first-generation cell-to-pack (CtP) technology. In the Zeekr 009, however, the Qilin battery is only installed in the 140 kWh variant.

Zeekr also provides information on the sensor and IT equipment that is particularly popular in China: Seven cameras, four 360-degree cameras and 13 radars are installed. The information is processed by two 7-nanometre chips.

The 001 made its market debut in October 2021, and according to figures just released by Zeekr, 10,119 vehicles were sold one year later – in October 2022. According to the electric car brand, this is a new record and an increase of 22 per cent compared to 8,276 vehicles sold in September. Incidentally, on 9 September Zeekr announced that the available production capacity for the current year is sold out.

Meanwhile, it appears that Geely is planning to spin off its Zeekr subsidiary and list it on the Hong Kong Stock Exchange. According to CnEvPost, Geely has filed an application to this effect with the stock exchange. Further details are expected to be announced at a later date. Zeekr was officially established in March 2021.

Geely’s CEO also confirmed the company’s tentative plans to bring the Zeekr 001 to European markets, and confirmed that this will take place next year.

Norwegian EV sales back up from September