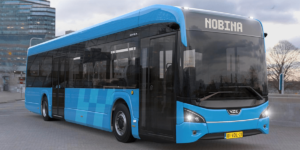 VDL Bus & Coach has received the first order from Sweden for the new generation of its Citea electric bus. Public transport operator Nobina has ordered four new generation VDL Citea LE-122s with 490 kWh batteries. They are scheduled to enter service in the Swedish municipality of Ale in the summer of 2023.

Specifically, the quartet will be launched via Västtrafik, Sweden’s second-largest transport association based in Skövde. The location is Ale, a municipality of 30,000 inhabitants north of Gothenburg. According to a statement from VDL, the buses are of the Citea LE-122 type from the new Citea generation, which will be introduced in May 2021. The 490 kWh is the largest battery configuration offered for this type. A few days ago VDL had already received an order for 64 Citea buses from the Deutsche Bahn transport company Arriva in the Netherlands.

The Citea generation, which was introduced in May 2021, is available in LF and LE variants. The LF stands for “Low Floor”, i.e. a continuous low-floor concept. The LE denotes a “low entry” vehicle, which has a low entrance but a raised floor and a different seating position. The new Citea is 12.2 metres long. The solo bus is available as LE or LF, the other bus variants in 13.5 metres (LE), 14.9 metres (LE) and 18.1 metres (LF) length, however, only in one version each. All variants are expected to have an operating radius of 500 to 600 kilometres.

The new Citeas will be built at VDL’s production facilities in the Netherlands and Belgium. According to the company, a large proportion of the parts (“components that together account for more than 80 per cent of the bus weight”) come from within a 1,250 km radius of the assembly lines from Western European countries.