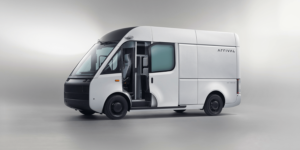 Things at the British electric vehicle start-up Arrival apparently continue to be anything but smooth. After the strategic reorientation of the company, there are now media reports that an Arrival electric delivery van caught fire during a demonstration for the customer UPS.

The Daily Mail reports that the vehicle caught fire at Arrival’s headquarters in Banbury. The vehicle could still be rolled out of the hall, but the car park was considerably damaged due to the high temperatures, according to the unconfirmed report. However, there were reportedly no injuries. Morale among the remaining staff had sunk to a low point, which had also led to tools being stolen from one of Arrival’s sites and internal information being leaked.

In August, Arrival confirmed rumours that it would focus all its efforts on getting the announced electric van on the road – the electric bus project and work on its own electric car were put on hold in the summer.

Arrival itself, meanwhile, officially announces that the company is having problems with its listing on the US stock exchange Nasdaq: Because the share price has been below one US dollar per share for 30 consecutive days, Arrival no longer meets Nasdaq’s regulations. The company has now been granted a grace period until 1 May 2023 at the latest to comply with the regulations.

Canada is getting protective of their lithium supplies