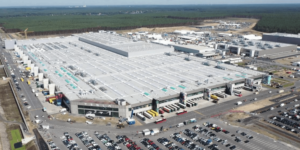 Tesla wants to submit the application for the expansion of its factory in Grünheide this year, combined with an increase in capacity from 500,000 to over one million electric cars per year. This is according to the 2023 budget plan for the Oder-Spree district.

We first reported on Tesla’s plans to increase the production capacity of the vehicle plant in Grünheide at the end of October. According to a report in the local German publication Märkische Oderzeitung at the time, the expansion involves 70 hectares in the north of the site. While the clearing is still covered by the current development plan, Tesla has to reapply for the expansion of the factory itself. The planned hall must therefore be approved again in accordance with the Federal Immission Control Act. In other words, there will again be public participation and – this is how Tesla proceeded with the previous factory construction – in all likelihood a series of applications for preliminary permits in order to be able to start promptly.

The Oder-Spree district administration now provides further information in its budget plan. The document states: “The company (Tesla, editor’s note) has also announced that it will submit an application to expand the plant at the end of 2022, combined with a further increase in capacity from five hundred thousand to over one million cars per year.” The latter point in particular is interesting, because until now, apart from vague expansion plans, nothing was known about the dimensions of the next phase of construction. The figures can now be interpreted to mean that the new hall should have a similar capacity to the first construction phase.

The expansion plans are flourishing at a time when Tesla is still in the ramp-up phase of the first factory section. As of the end of September, 2,000 vehicles a week are coming off the production line in Grünheide. According to earlier information from dpa, the goal is 5,000 cars per week by the first quarter of 2023.

Incidentally, the expansion plans should not be confused with an extension announced in September for a new logistics centre including a goods station. This is to be built to the east of the current site on a good 100 hectares of land. Tesla initiated the latter expansion process in May 2022. At that time, an application was submitted to initiate a development plan process for the 100 hectares.