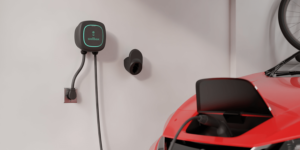 Uber and Barcelona-based Wallbox Chargers are expanding their cooperation to include seven European countries. Uber drivers in the UK, Germany, the Netherlands, Spain, France, Portugal and Belgium may now buy home chargers from Wallbox at discounted rates.

The agreement builds on Wallbox and Uber’s partnership in the USA and Canada which was launched in 2021. It also ties into the ride-hailing app’s advances to support freelance drivers in going greener.

While Uber says it is ambitious to become a zero emissions platform in Europe by 2030, this largely follows policies. Drivers must increasingly get in line with cities installing or expanding low-emission zones and Uber says drivers were going electric in Europe nearly five times faster than average European private car owners. So far, 6.2% of kilometres driven on the platform are now fully electric, so the company.

However, access to charging infrastructure remains key to the transition, especially in cities like London, which Uber designated as a “100% EV city” by 2025.

Chris Hook, Head of Global Sustainability Strategy at Uber, considers partnerships with private and public stakeholders “key” for this to succeed. “By expanding our collaboration with Wallbox in Europe, we hope this will help address this key barrier for switching to EVs and help ensure drivers can make the switch as seamlessly and as soon as possible,” he said.

Neither Wallbox nor Uber would deliver details on the deal. However, drivers may see options to go electric in the ‘EV Hub’ available in the drivers’ app.

As for the partnerships, Uber has made similar deals before. As with all such advances, the company does not offer drivers money but vehicle access and financing deals. Taking London as an example again, the company teamed up with fin-tech company Moove to help provide drivers with electric vehicles through its rent-to-buy model. Moove plans to scale to 10,000 electric cars in the British capital by the end of 2025. Uber has also invested £5 million in chargers, which will be branded by Uber but available for all London drivers to use, as reported.

On the rider-facing app, Uber offers lower emission options like Uber Green and Comfort Electric in some regions. Uber Comfort, primarily available in the USA, sits above Uber Green since it calls a premium in price and is EV-only. Uber Green, however, sometimes includes PHEV and hybrid cars.

Nikola Motor to rely on ChargePoint solutions in the US