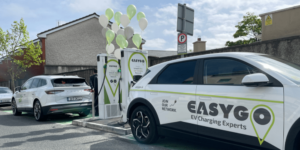 In Ireland, EasyGo has announced a multi-million euro investment to install 200 fast DC chargers in towns and villages across the country.

This investment is part of a partnership with Ireland’s telecoms company Eir where telephone kiosks are being removed and replaced with Tritium electric vehicle chargers. The amount of the investment has not been disclosed.

The upcoming phase of DC charger roll-outs will cover 70 locations. For the remaining 130 locations for DC Tritium chargers, EasyGo says it is “actively engaged with other local authorities,” whereby the chargers are to be delivered at zero cost to county councils.

This current fast-charging programme was launched in Carlow in May 2022. This has enabled EasyGo to conclude contracts to add Tritium chargers at first 70 locations. These are confirmed for the counties of Offaly, Mayo, Cavan, Waterford, Kilkenny, Tipperary & Monaghan in the next phase of this project over the next six months.

David Nicholl, Tritium’s Chief Sales Officer, said: “As an Irishman, I’m incredibly proud that Tritium has been selected as the exclusive technology partner for this project which will bolster Ireland’s transition to electric vehicles. With Tritium’s world-class fast chargers, electric vehicle drivers in Ireland will gain access to a fast and convenient charger designed to thrive in any environment.” He explained: “The efforts of EasyGo and eir will not only increase fast-charger availability, but also make a positive environmental impact. Firstly, by encouraging more drivers in Ireland to adopt electric vehicles and secondly, by repurposing existing infrastructure to bring these chargers online.”

EasyGo is the largest private car charging network in Ireland used by more than 30,000 drivers across 2,400 existing charge points. EasyGo first partnered with Tritium for its DC chargers in 2019, when EasyGi.ie announced plans to install 88 of Tritium’s DC rapid chargers by the end of 2020, with at least 20 to be deployed by the end of 2019. In October last year, EasyGo secured financing in a 15 million euro round. This enabled the company to grow its charge point network across the Irish Republic and expand into Northern Ireland.

Kempower to provide fast chargers for Neste in Finland