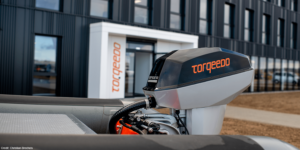 Torqeedo, the company specialising in marine electric drives, has opened a new 8,300 m2 building near Munich. The new headquarters now houses all business activities, including research, development, and production, under one roof.

As became clear when Torqeedo reportedly laid the foundation in 2021, the new HQ is near the company’s initial base in the town of Oberpfaffenhofen. More precisely, Torqeedo remains on the Air Tech Campus (ATC), where it has been since 2012. Due to various delays, Torqeedo could not move during the first quarter of this year as planned.

The new building comprises 3,720 square metres of office space and 4,800 square metres of warehouse, production and R&D space. It is also a move towards closer integration. Until now, the business divisions spread across several locations in the ATC – in the course of its growth, Torqeedo had gradually rented additional space that had just become available in the industrial park. Now, administration, production and development, and logistics will be united under one roof in the new 8,300-square-metre building.

Co-managing director Ralf Plieninger said the advantage of consolidating the three production sites into one in the new building would increase capacity utilisation as personnel can be shifted between production lines. “Additionally, we have room for growth and constantly quality-oriented processes,” said Plieninger.

In the days ahead of the opening, Torqeedo had shown vital customers, strategic partners, boatbuilders, dealers and distributors around the new headquarters for a series of strategy and technology workshops.

Attending the official opening that followed, the Head of the Bavarian State Chancellery and State Minister for Federal Affairs and Media, Dr Florian Herrmann, said, “Torqeedo is a global champion for cleantech and electric mobility on water and enriches the location with its new company headquarters”.

The minister added climate protection and zero-emission mobility were “key issues in Bavaria”, in which they were investing over 22 billion euros by 2040.

“Whether by road, rail, air or water, sustainable forms of propulsion are needed to achieve the climate targets,” said Fabian Bez, Torqeedo’s chief executive officer. “As Torqeedo, we recognised this trend early on and developed battery-electric drives for watercraft.”