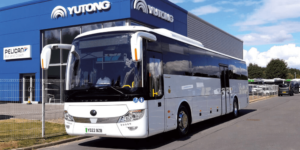 Pelican Bus and Coach, the sole UK and Ireland importer and distributor for electric bus manufacturer Yutong, has secured £60m funding from HSBC UK. Pelican says the money will help them supply up to 250 new e-buses to operators and confirmed first contracts.

According to Pelican, they will mostly offer electric single-deck buses and an electric coach and airside bus. In 2023, an electric double deck will join the UK model range, which Pelican expects to be operational in the next twelve months.

Richard Crump, managing director at Pelican Bus and Coach, said: “With this deal, we not only increase the number of electric buses in operation across the UK but also maintain our leading role in the move towards zero-emission public transport.”

Jamie McCullough, corporate relationship director at HSBC UK, added: “Pelican is an ambitious, family-owned business that is leading the way in reducing the environmental impact of public transport. This funding, secured through our dedicated HSBC UK green fund, will support the business in realising its ambitious growth plans and furthering its reach across the UK.”

Among Pelican’s most prolific clients is McGill’s, which ordered nearly 100 Yutong electric buses to join the services in Scotland, as reported.