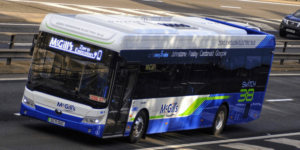 McGill’s Buses has ordered a further 41 battery-electric buses from Yutong. They will be part-funded by the Scottish Zero Emission Bus (ScotZEB) fund and take to 96 the number of Yutong zero-emission buses with the operator in Scotland.

The new batch comprises ten E10 buses measuring nearly eleven metres, and the remaining 31 will be the 12.2m E12. Supplier Pelican Bus and Coach previously delivered 55 E12s to McGill’s, all of which arrived before the COP26 climate change summit in November 2021.

Says McGill’s Buses Chief Executive Ralph Roberts: “Placing this repeat order with Pelican was a very easy decision. The first two deliveries of 55 zero-emission Yutong buses were completed on time, on budget and completely without the normal teething issues that we have come to expect with new buses nowadays.”

McGill’s had received funding through ScotZEB in February 2021 and subsequently placed orders with BYD-ADL and Yutong as reported.

The 41 additional buses are due to enter service in Q1 2023, subject to infrastructure work. When they are in use, almost 25% of McGill’s fleet will be zero-emission – the majority of them from Yutong, adds Head of Yutong Sales UK Ian Downie. £9.09m of ScotZEB money will go towards the latest batch.

The Scottish Government has awarded over £62 million (about €74Mn) in the first phase of its Zero Emission Bus Challenge Fund (ScotZEB) to replace 276 old diesel buses with new electric buses and the necessary charging infrastructure.

Phase two of ScotZEB was scheduled to open to applications in April, subject to a review of phase one and with lower rates of subsidy.

The Group in today’s announcement did not state where they will deploy the new e-buses.