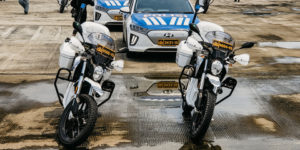 While delegates and politicians have flown into Bali, Indonesia, to attend the G20 summit starting today, some more climate-friendly news is happening. A fleet of hundreds of electric motorcycles is operating among the security forces and on shuttle duty.

The G20 Summit is being held on the remote island of Bali this year since Indonesia holds the G20 presidency and is, therefore, host to leaders of the most industrialised nations. And, with climate change on the meeting agenda, Indonesia’s President Joko Widodo called for 100% of the government’s transport used during the event to be zero-emission.

The fleet provided by Zero is comprised chiefly of the Zero DSRP model, which is available exclusively to global fleet operators and authority forces. Zero’s delivery also includes SR/S and SR/F models that the Indonesian security forces have modified.

For Energica, the e-motorcycles ordered by Indonesia are the largest single order to date and valued at about $2 million. The Indonesian police department will use the Energica bikes when escorting all international government delegates attending the summit.

Indonesia – known to the industry as a growing hub for manufacturing or nickel supplier – says this makes it the first country in the Asia-Pacific region to operate an electric motorcycle fleet, and the country is committed to putting two million electric vehicles on the road by 2025.

Of course, all these light electric vehicles were imported. However, we suggest looking at the bright side best expressed by Energica CEO Livia Cevolini: “When G20 delegates arrive in Bali, they will be welcomed and escorted by a security detail riding Energica bikes. That means their first experience will be seeing zero-emission, high-performance vehicles in action. My hope is that this experience sticks with each delegate throughout the summit and in all discussions around climate change and transportation.”

It is also not the first time manufacturers have helped showcase to government representatives that solutions exist. At the COP26 summit in Glasgow, the Scottish police used a fleet of Harley-Davidson LiveWire electric motorcycles for patrols, while zero-emission buses reportedly shuttled delegates between the blue and green zones of the climate conference.

Let there be hope in (real) action.