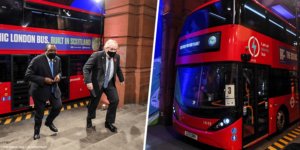 While the world looks to COP26 in Glasgow to turn the tides on catastrophic climate change, we look at change happening on the ground – the decarbonisation of public transport, a field where host nation UK and specifically Scotland may actually shine. Local manufacturers are building unique electric vehicles and are increasingly banking on both batteries and hydrogen to electrify entire fleets.

Getting to and around Glasgow in a climate-friendly manner, however, is no easy feat. Already ahead of COP26, a spokesperson for the summit reportedly encouraged delegates to use public transport as much as possible. Since EVs and chargers appeared in short supply, campaigners also insisted that heads of state should use free electric shuttle services.

Which officials then promptly did. Last night, UK Prime Minister Boris Johnson and UN Secretary-General António Guterres, among other state leaders and COP26 stakeholders, got on electric double-deckers that had arrived at COP26 fresh from ADL’s production line in Scotland. Built initially for Stagecoach’s operations in London, the buses driving around Glasgow are painted in the iconic red of Transport for London’s vehicles. 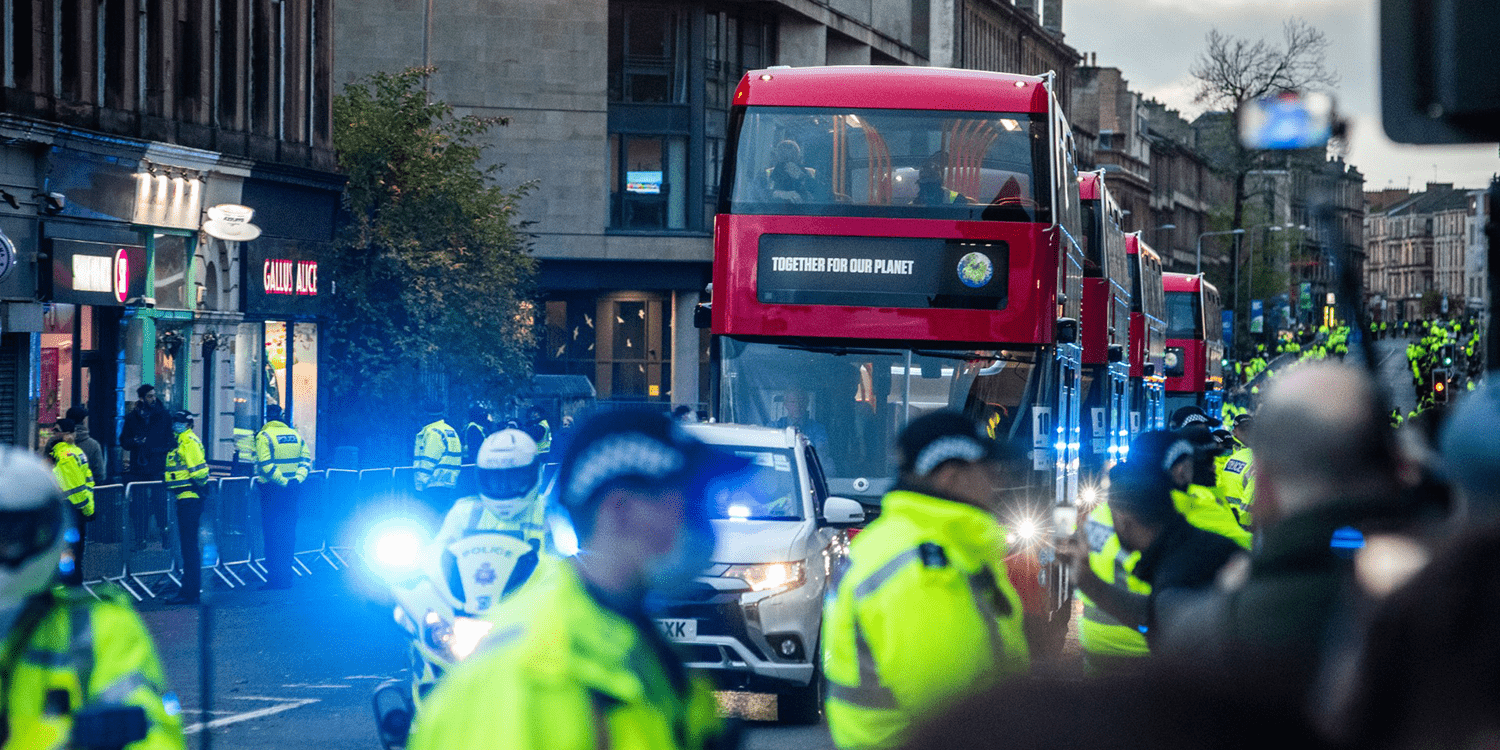 These EVs are a prominent example of Great Britain’s bus market. UK bus manufacturers realised they had to think big and have forged ahead with zero-emission double-deckers. Once a model believed to be too large to be electrified, this task is now being undertaken by both ADL in partnership with BYD, as well as Wrightbus, a company that has yet to get back on track fully but has been making advances in hydrogen-powered transport.

ADL can already look back at a partnership with BYD for battery-electric buses since 2015. ADL said it had delivered 700 battery-electric buses to date, with about 500 on order in the UK when we asked about the current business. The company also told electrive that they expect more than half of new buses in the UK market will be zero-emission vehicles this year and that their proportion will continue to increase “rapidly”.

“We expect that more than half of new buses in the UK market will be zero-emission vehicles this year and that their proportion will continue to increase rapidly.” — Stefan Baguette, Group Marketing Communications Manager at ADL

The Scottish-Chinese partnership is a success story and one that the British Government seems eager to tell in Glasgow. Westminster has invited ADL to present its solutions in the Blue Zone at COP26. The Blue Zone is accessible to official delegates only and opposed to the Green Zone that is open to civil society activists and businesses.

Paul Davies, ADL President & Managing Director, said he considered it a “great honour for Alexander Dennis to have been invited by the UK Government to present our zero-emission bus in the Blue Zone at COP26, reminding negotiators and world leaders that without investment in clean public transport, climate goals cannot be achieved.”

The ADL e-bus of type Enviro400 EV is also the only electric bus exhibited within the UN-controlled Blue Zone. However, it is a showcase since security regulation in the Blue Zone prohibits the bus from moving. The bus also won’t remain in Glasgow after the summit since it is on loan from the UK bus operator National Express and comes from the company’s real-world fleet, which reportedly comprises 29 electric double-deckers running in Birmingham, Solihull and Coventry for over a year. 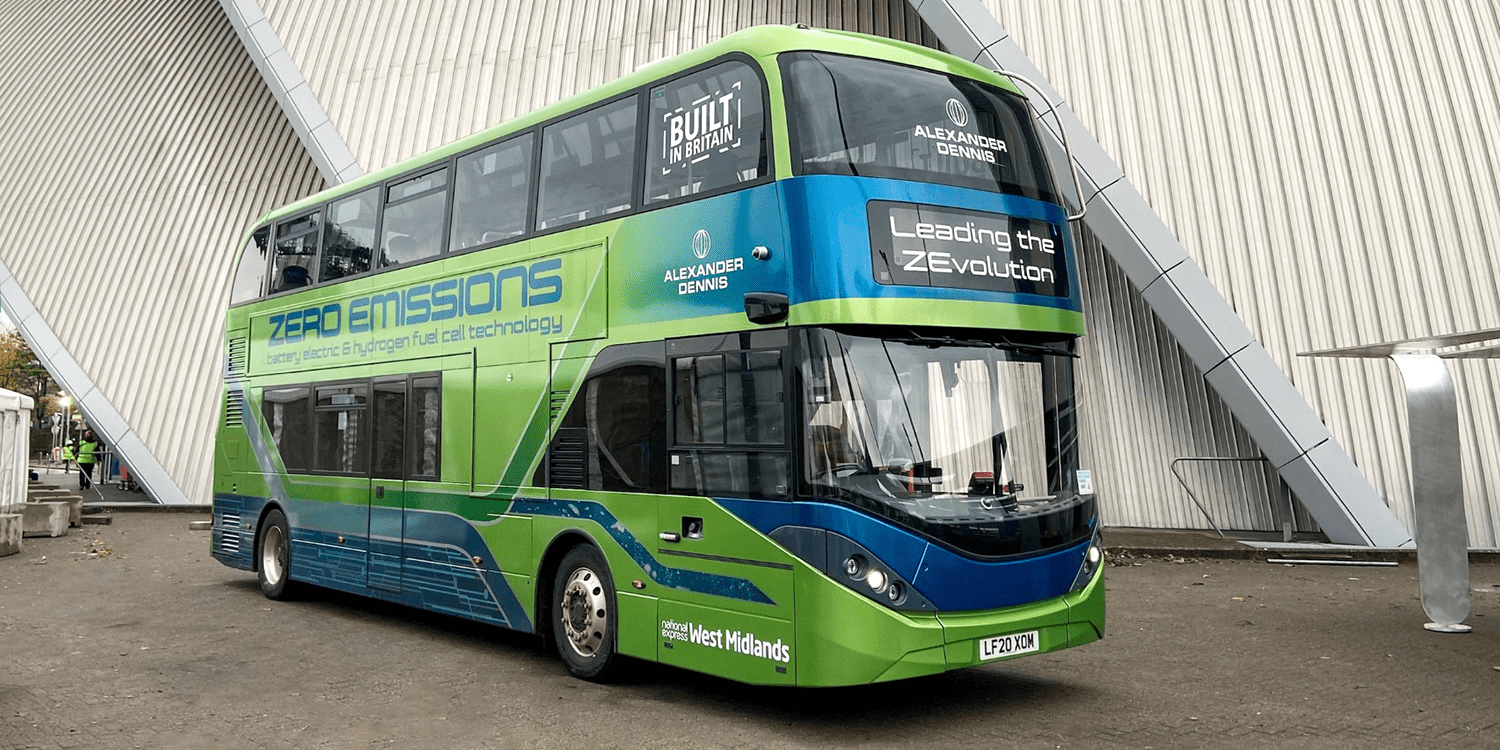 National Express leads by example how to decarbonise public transport once you set ambitious targets. The public transport company in the West Midlands ceased purchasing diesel buses in 2019 altogether and aims for an entirely green city bus fleet within the decade, followed by coaches to be solely zero-emission by 2035. “We bought our last ever diesel bus in 2019, and by 2030, our entire 1,600 West Midlands fleet will be zero-emission,” confirmed David Bradford, the units Managing Director. “It is very exciting that one of those buses will be ‘in the room’ at COP26 where the decisions will be made that affect all of our futures.”

Almost exactly a year ago, the company ordered the 29 double-deck electric vehicles in 2020 and also placed an order for 20 hydrogen-powered buses, in partnership with Birmingham City Council as reported at the time.

On the road to change

When it comes to hydrogen fuel cell buses, Wrightbus must be mentioned. The company based in Northern Ireland only just got back on its feet after Jo Bamford bought the firm out of administration two years ago. Since then, Wrightbus and Ryze Executive chairman Bamford pointed out that they had increased the workforce from 56 to more than 900 and introduced four zero-emission buses in twelve months. These include double-deckers and single decks in both battery-electric and fuel-cell electric versions, and it may be the latter that sets Wrightbus apart.

The company plans to make 3,000 of its hydrogen fuel cell buses by 2024 and has opted to showcase the fuel-cell double-decker in Glasgow in the Green Zone, alongside manufacturers such as Rolls-Royce, Mini, Polestar, or Switch Mobility. But Wrightbus has made a campaign out of it. A Wrightbus StreetDeck Hydroliner set out on 18 October to drive 600 miles from London to the UN Climate Change Conference. 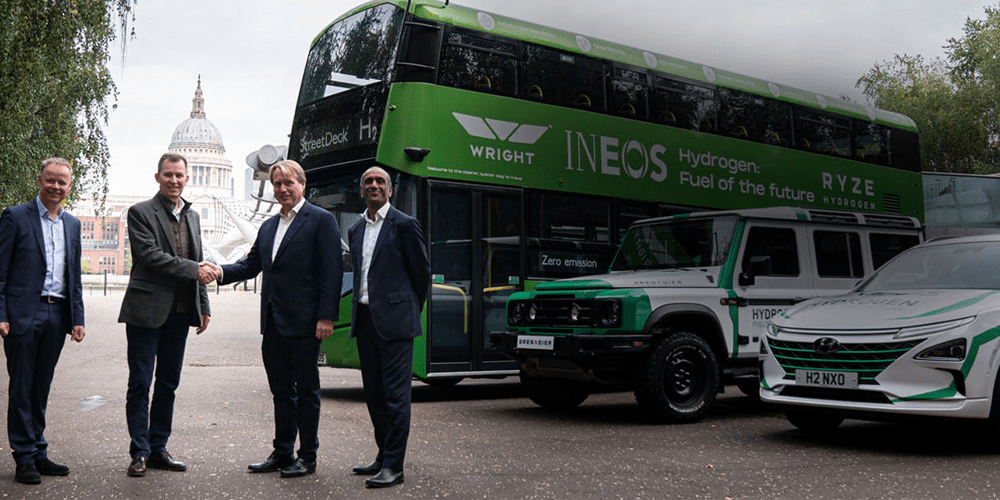 Dubbed the ‘Hydrogen Roadshow’, the Hydroliner stopped off at several companies working on hydrogen-related solutions. One of them was National Express since Wrightbus delivered the 20 fuel cell buses to Birmingham mentioned earlier. The buses have been purchased as part of the Council’s Clean Air Hydrogen Bus Pilot, which aims to ‘kick-start’ the hydrogen market as a viable zero-emission fuel.

Yet, the race is on and up for debate. In the run-up to COP26, ADL was part of the consortium led by SSE Energy Solutions that also conducted a two-week tour using a battery-electric bus from London to Glasgow titled ‘Road to Renewables’.

ADL-BYD is more deeply involved in Glasgow than “only” making showcases. Operator First Bus has taken COP26 as the opportunity to introduce 22 single-deck e-buses to the city, which will stay in service after the delegates have left.

ADL and Transport Scotland also confirmed to electrive that First Bus had won the tender to operate the official delegate shuttle between Glasgow city centre and the COP26 event site. But, more importantly, the vehicles are only the first few of an order now totalling 148 electric buses made by ADL-BYD to shuttle Glaswegians from March 2023.

The expected 148-strong bus fleet also prompted the company to construct what they claim will become the UK’s largest EV charging hub once they will transform the Caledonia bus depot. Work at the depot already began in summer this year. The Caledonia depot is designed to charge up to 300 EV buses on-site, so the company.

Following completion in 2022, the adapted depot will also have the capability to charge 89% of the depot’s electric bus fleet while using smart charging software by Heliox. The Dutch company’s CEO Michael Colijn said that the modular charging system can handle “high demanding bus routes and easily grow with fleets fast charging needs by ensuring power demand is utilised at the most efficient time.”

Heliox also confirmed to electrive, that it would have a total of 80 chargers with 160 charge points or outlets across Glasgow within the next few years, making it the UK’s biggest depot powering 12MW. At the moment, it isn’t Europe’s largest, however, as the Heliox depot in Schipol airport in the Netherlands accommodates 100 buses powering 13MW. 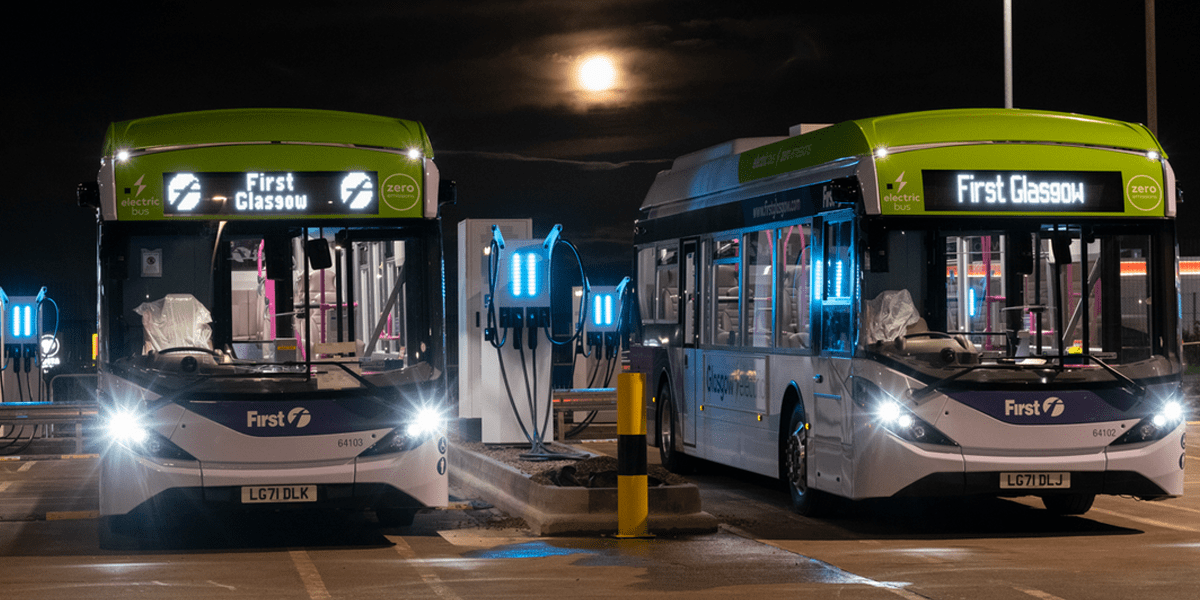 The Glasgow bus purchase and corresponding Caledonia charging hub is also an example of a successful public-private partnership as the transformation is being supported by £35.6m, including £28.2m from the Scottish Government’s Scottish Ultra-Low Bus Scheme SULEB.

First Bus has pledged to only invest in zero-emission vehicles nationwide from December 2022, with a 100% zero-emission fleet by 2035.

We asked the company’s Programme Director for Decarbonisation Delivery, Garry Birmingham, whether policies were driving the change. He pointed to SULEB and ScotZeb in Scotland and ZEBRA in England, all schemes specifically focusing on zero-emission buses, which were making internal business cases “more palatable during these uncertain times.”

He added, “we are open and agnostic to the two current technologies; we currently see that BEV is easier to implement given battery ranges on a single charge and total cost of ownership being lower than an FCEV, but we are aware that the technology horizon may change.”

Is there a preference for BEV or FCEV technology?

Accordingly, the arrival of 148 EV buses into Glasgow is just one chapter. First Bus has also launched its first hydrogen-powered double-decker in Aberdeen as part of an £8.3 million project funded by the Aberdeen City Council, the European Union, and the Scottish Government. The 15 hydrogen buses managed by First Aberdeen were manufactured by Wrightbus.

Considering the double-powered strategy, Garry Birmingham, added “Both technologies come with very expensive infrastructure costs and unknown future risks,” given the expected minimum service life of a bus being 15 years. But, at the same time, he was “hopeful that FCEV technology, vehicle price parity and available Green Hydrogen production and cost reduction can play its part in our future also.”

When we asked ADL the same question, it pointed out it would launch updated hydrogen options next year. Telling electrive about the reasoning behind the two-pronged approach, ADL’s Stefan Baguette said, the company “generally follows a strategy of market-led development, and there is interest in both technologies in the UK market.”

In particular, fuel cell technology may prove a viable and complementary option when it comes to double-deckers. “One factor is the relatively small amount of physical space available on double-deck buses to install components, and weight constraints, which will continue to limit the battery sizes that can be offered, and will therefore limit the range. Hydrogen fuel cell technology offers some potential advantages here, especially in terms of weight,” explained Mr Baguette.

Also, when it comes to government strategy, he pointed out that UK Government policy has always been target-driven rather than focused on a particular technology. Launched in March this year, the ZEBRA scheme is to support zero-emission buses of any kind, as long as they are made in Britain and as part of a three-billion-pound “bus boost” by Boris Johnson. So far, the UK aims to become net-zero by 2050.

For its part, Scotland declared a climate emergency in 2019 and pledged net-zero carbon neutrality by 2045, “at the latest,” as First Minister Nicola Sturgeon said ahead of COP26. The country is one of the few that made the targets legally binding. Commitments include the phase-out of new petrol and diesel cars and vans by 2032, light commercial vehicles by 2030, and the electrification of public transport urged by the Bus Decarbonisation Taskforce.

Whether the showcases in Glasgow will swing a leader or two remains to be seen, it is time to get on the bus and acknowledge the decarbonisation potential.