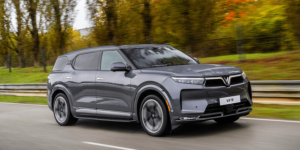 The US electric car subscription service Autonomy has significantly increased its order from the Vietnamese manufacturer VinFast. With the new order, VinFast is now commissioned to deliver more electric cars to Autonomy than Volkswagen.

Autonomy initially ordered 22,790 electric cars from 17 carmakers in August, including 400 from VinFast. Autonomy is now commissioning VinFast to deliver more than 2,500 electric cars, spread over the models VF 8 and VF 9 – VinFast’s two largest e-SUVs. Deliveries are scheduled to begin within the next twelve months.

The total number of electric cars ordered by Autonomy now adds up to around 25,000 vehicles with the August order placement. In the original order, VinFast was still behind Mercedes-Benz and Toyota in terms of order volume, with Autonomy ordering 600 electric cars from each. The new order now places the Vietnamese manufacturer between industry giants such as General Motors (3,400) and Volkswagen (2,200).

Le Thi Thu Thuy, Vice Chairwoman of Vingroup and Chairwoman of VinFast said: “This is an exciting moment for VinFast as our vehicles are about to enter the US market. The order from Autonomy is a testament to the trust we have built in the market. Bringing the VF 8 and VF 9 to Autonomy’s EV subscription fleet will give consumers yet another way to experience our brand and discover the benefits of our premium smart EVs.”

Scott Painter, Founder and CEO of Autonomy, explained that his company’s subscription model makes it easier for consumers to switch to an electric vehicle. With the large number of different models that is available with Autonomy, he says that consumers will more easily be able to consider new brands and models on the market. The subscription model is flexible and does not require the kind of commitment from customers that are involved in leasing or purchasing a vehicle.

Autonomy offers an entirely digital interface for customers to conclude electric car subscriptions in a process that the company says takes only 10-15 minutes. At the same time, VinFast also offers flexible sales options for customers purchasing vehicles with batteries or with a battery subscription program.

Autonomy launched in California earlier this year and just a few days ago announced that it is expanding to Seattle, Washington, including Tacoma and Bellevue.