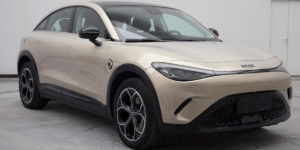 A registration application in China has revealed the first pictures and data on the second model of the Smart brand. Next to a modified body, the model will also have an all-wheel drive with a second electric motor, and at least one more battery option.

The second model after the Smart #1 will thus be called Smart #3 and will be a coupé-like SUV model that is longer and wider but lower than the Smart #1. In purely visual terms, the model looks more like a compact car against the white background without reference. However, the data known from the registration application refute this impression: the Smart #3 is 4.40 metres long (i.e. 13 centimetres longer than the #1), but only 1.55 metres high instead of 1.63 metres. In addition, the wheelbase is said to be slightly longer at 2.785 instead of 2.75 metres. This gives the vehicle different proportions compared to the somewhat tall #1.

The single-engine version will produce 200 kW, as in the Smart #1. A version with a second electric motor in the front is also planned, which will contribute an additional 115 kW. According to the document, the electric motors will be supplied by Weirui Electric Auto Technology. The NMC batteries are to come from suppliers CALB and Sunwoda – but nothing is yet known about their size. The #1 is known to have 66 kWh.