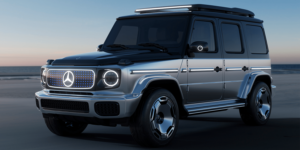 At the halfway point of the four-year development programme, Mercedes-Benz has begun endurance testing of the electric G-Class with several prototypes. The Stuttgart-based company has also confirmed some details about the production model planned for 2024.

For example, like the concept unveiled in September 2021, the EQG will have four electric motors mounted close to the wheels. The performance data are not yet revealed, but Mercedes-Benz reveals that there will be different model variants with different outputs, including an AMG version. The battery of the EQG is said to offer a usable capacity of around 100 kWh.

However, this will not be the 107.8 kWh battery from the EQS and EQS SUV. For one thing, the EQG is based on a completely different platform with a ladder frame, and for another, it will have different cell chemistry: It was already known that silicon anode chemistry from Sila Nanotechnologies will be available as an option for the electric G-Class for the first time.

As reported, Mercedes-Benz is planning the market launch of the EQG in the period from mid to late 2024. The EQG will be produced by Magna in Graz. Production will probably be able to take place in large parts on one line: As Mercedes representatives told the British magazine Autocar, there will be two different ladder frames – one with the battery and the electric motors close to the wheels and one with the combustion engine powertrain. The same vehicle – or “hat” in industry jargon – will then be placed on these frames and connected to the ladder frame at eight points.

However, the fact that the production model will have four electric motors, like the study, was open for a long time. “There were intensive discussions surrounding the four-motor layout. It is incredibly complex. It is also very expensive,” says Emmerich Schiller, head of the off-road vehicle product division at Mercedes-Benz AG and managing director of Mercedes-Benz G GmbH. “But with two electric motors you have differential locks, which means a combination of electronic and mechanical systems. With three motors – one up front and two on the rear axle, you don’t get the full performance in off-road conditions.”

To not only match the performance and the combustion G-Class in AMG trim on the road, but also to keep up with the familiar model off-road, each of the four electric motors has its own two-speed gearbox. This acts like the gear reduction in an internal combustion off-road vehicle: on the road in the Eco, Comfort and Sport driving modes, the EQG will primarily use second gear. In the three off-road modes Trail, Rock or Sand, on the other hand, it is not top speed or acceleration that counts, but maximum control of the wheel torques – for which a particularly short-reduction gear is used. “It is incredibly precise,” Schiller also says. “The individual control of drive to each wheel provides a whole new level of ability. We have even more possibilities off-road.”

The endurance tests are not only done on the road, but also off-road. “In off-road, it is less about the overall range and more about driving hours. We’ve seen some incredible figures during testing,” says Schiller.

Subaru prepares to launch the 2023 Solterra in North America