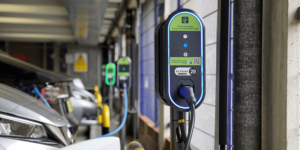 This further extends Apcoa and Compleo‘s partnership which has already seen 451 AC charging stations installed in six public car parks at Network Rail stations. Without revealing the exact value of the order, the Dortmund-based charging infrastructure manufacturer said only that is a multi-million deal.

The German manufacturer Compleo is increasingly focusing on service, as the new CEO Jörg Lohr recently confirmed in an interview with our German colleagues at electrive.net. In the UK, Compleo is providing a 24-hour service with special maintenance and support teams at the customer service centre to “ensure particularly high availability of the charging network.” On-site service was also important to customer Apcoa.

Under the umbrella of the EBG Group, the charging infrastructure manufacturer Compleo went public in 2020 and invested the capital that was raised in, among other things, acquiring the start-up Wallbe, a full-service provider of charging solutions. At the same time, Compleo also acquired innogy eMobility Solutions.

Valentin Scheltow, Managing Director of Compleo UK, revealed: “The two organisations have in a short period of time made significant progress in the market. We are now actively working on our next project for a major NHS Trust and 5 different city-centre car parks across the UK.”

Just two months ago, Apcoa announced plans to install up to 100,000 new EV charging stations in its car parks by 2035. The European parking operator manages 1.8 million parking spaces in 13 countries.