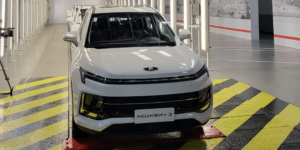 Under pressure from Western sanctions, Russia is making a new attempt at domestic electric car production. The Russian manufacturer Kamaz is reviving the Soviet-era Moskvich brand, yet, with Chinese involvement, and will produce the Moskvich 3 in a plant near Moscow given up by Renault.

The electric Moskvich 3 appears to be a copy of the JAC S4 from China, which Kamaz will only assemble at the plant starting this December. The company targets making 600 cars before the year’s end, of which 200 shall be electric. The remaining 400 continue to rely on internal combustion engines. In 2023, Kamaz says it wants to build at least 50,000 cars, including 10,000 electric vehicles. The 2024 targets are 100,000 cars, including 20,000 electric cars.

Whether these ambitions will bear fruit remains to be seen. Many car makers have attempted to launch EV production in Russia. In August of this year, the Russian Lada manufacturer Avtovaz announced its first electric model called Lada e-Largus. The car is based on the Dacia Logan MCV, which was discontinued in 2013 but is unlikely to arrive before 2024, if at all. Previously, the Russian electric small car Zetta had been planned for the end of 2021, yet we have heard nothing more about this project since.

With reporting by Stefan Köller.