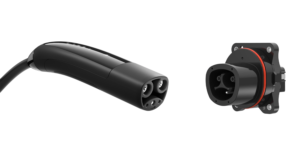 The CCS association CharIN has released a statement of discontent after Tesla recently announced it would release the design of its proprietary Supercharger connector to make its system the charging standard in North America. Tesla remains a member of the consortium behind the CCS charging standard.

As CharIN writes in a statement, “We strongly encourage Tesla, as a CharIN member, to work with CharIN’s membership base, the standards organizations, and others to accelerate the adoption of a fully interoperable EV charging solution to transition to electric vehicles more quickly.”

Tesla joined CharIN in 2016 and continues to be listed as a member on the CharIN website. For European markets, Tesla switched to the CCS2 standard with the introduction of the Model 3. The Model S and Model X used to be offered with a Type 2 plug modified by Tesla for DC charging. In the US, however, all Teslas since the Model S have the proprietary charging standard, which Tesla now calls NACS.

CharIN emphasises that the Combined Charging System (CCS) and the Megawatt Charging System (MCS) are “the global standards for charging all types of vehicles”. The organisation says it encourages stakeholders “to investigate ways to focus on market acceleration rather than creating yet another form factor alternative, which will lead to further consumer confusion and delay EV adoption”.

Tesla had said in mid-November that it would release the design of the Supercharger plug, now called the “North American Charging Standard”, to establish it as the charging standard in North America. The compact design is supposed to enable DC charging with up to one megawatt in addition to AC charging. It also has no moving parts and is “half the size and twice the performance of CCS connectors”.

For all the criticism of the Tesla proposal, however, CharIN also has words of praise – for example, for the inclusion of the DIN 70121 and ISO 15118-02 communication standards in the NACS proposal. “We also appreciate Tesla’s effort to move the e-mobility market forward even faster than it is moving now,” says CharIN.

Tesla launched its 40,000 Supercharger charging point worldwide a few days ago. CharIN now states that 61,000 fast chargers worldwide use the CCS standard. CharIN also contradicts Tesla’s statement that its “Supercharging network has 60 per cent more NACS charging points than all CCS-equipped networks combined”: according to current Plugshare data (including public and restricted use), there are 18,880 CCS connections in North America (including the US and Canada) compared to 18,405 Tesla Supercharger connections.

Add in North American AC chargers, where CCS1 vehicles can charge without an adapter, as opposed to Teslas with a NACS connection, and the ratio is significantly skewed in favour of CCS vehicles, with 178,926 J1172 connections compared to 15,529 Tesla Destination Chargers.