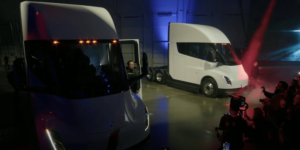 Not too many details were revealed beyond that. Like the plaid versions of the Model S and Model X, the Tesla Semi uses a drive system consisting of three electric motors, one of which is used for the most efficient constant speed and the other two for acceleration. The battery is expected to take the electric truck 500 miles (about 800 kilometres) when fully loaded without stopping to charge – something Tesla claims to have recently demonstrated.

However, Tesla still does not name a price for the Semi and official information about the payload, the battery capacity, the performance of the motors and the date of the start of large-scale production is still missing. Tesla started production of the first units in October.

As expected, Tesla delivered the first electric trucks to long-time reservation holder Pepsi. In the USA, the Semi falls into truck class 8 with a gross vehicle weight of up to 80,000 lbs (about 36.3 tonnes). Electric trucks are allowed to exceed this limit by another 2,000 lbs, which translates to 37.2 tonnes. Tesla stated a few days ago that it had completed the 500 miles with an 82,000 lbs semi – i.e. fully loaded.

A big question mark, however, remains the dead weight of the semi, which determines the payload. As the US portal Electrek explains, Class 8 trucks can weigh between 12,000 and 25,000 lbs (around 5.4 to 11.3 tonnes), and the payload varies accordingly.

The price of the electric truck is also still unclear. Shortly after the prototype was unveiled in 2017, Tesla quoted an “expected base price” of $150,000 for the basic Semi model. At the time, $180,000 was quoted for a range-extended variant and €200,000 for the ‘Founders Series’ version. Since then, Tesla has not commented on its price expectations.

There were no major surprises at the presentation, however, one piece of news that was not yet known was that the electric pickup Cybertruck planned for the end of 2023 will probably adopt the charging technology of the Semi, meaning that it will also be able to be charged with up to 1 MW in the future.

Abt e-Line is developing a fuel cell transporter van