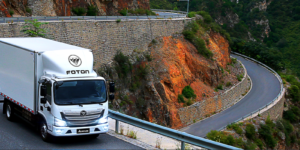 The Chinese commercial vehicle manufacturer Foton has concluded a development agreement with an un-named European partner for the development of a new electric light commercial vehicle. The time scale and different previous announcements indicate that the partner is likely to be the Piaggio Group.

Although the Chinese company’s latest announcement only mentions “a European partner”, it also says that this latest decision “extends the partnership established by the two groups in September 2017 to jointly develop innovative solutions for the light commercial vehicle market”. Foton now says the new agreement will “consolidate the partnership established by the two groups in May 2018 to develop and produce new light commercial vehicle products for the European market, based on FOTON’s mini-truck product platform.” The clue as to the identity of the unnamed partner lies therein that Foton says that the last two years of joint development with this partner resulted in the NP6 launched in January 2021, which was created in collaboration with Piaggio.

As Foton now writes, the agreement to develop a new light commercial vehicle with an electric drive was already signed at the end of November. In the coming months, the technical documentation for the project and the contracts will be finalised and should be launched in spring 2023.

The Chinese manufacturer of electric commercial vehicles sees great opportunity in European vehicle markets, citing EU laws on the effective ban of new combustion vehicles from 2035, which the company says is shifting the electric vehicle market into the fast lane. Foton has recently strengthened its presence in Europe with several trade fair appearances. In July, the manufacturer received EU-type approval from TÜV Rheinland for its iBlue EV electric truck. Seen as its access card to the European market, Foton points out that its vehicles have been granted Whole Vehicle Type Approval (WVTA), which is accepted throughout the EU without the need for further testing. Foton points out that it has a whole range of electric vehicles that include electric trucks, vans and buses with WVTA certification.

This year Foton received its largest overseas order to date in Chile, where the capital of Santiago de Chile ordered over one thousand electric buses. Foton’s electric vehicle know-how not only includes those with batteries but also electric vehicles with hydrogen fuel cells. In August last year, the Great Wall subsidiary FTXT Energy Technology and their vehicle partners Dayun, Dongfeng and Foton, supplied a fleet of 100 heavy-duty electric trucks powered by hydrogen fuel cells for a construction project in the province of Hebei.

Ebusco has presented an articulated version of the Ebusco 3.0