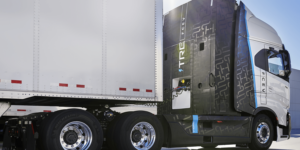 After E.On and Nikola announced in September that they wanted to drive forward the decarbonisation of heavy goods transport jointly, the two companies have now become a little more specific.

When announcing the partnership a few months ago, Nikola said they wanted to offer customers an integrated mobility solution to promote the use of hydrogen. Nikola and the European energy company E.On had signed a term sheet to underpin the cooperation and went to work on negotiating the conditions. This work has now borne fruit, with Nikola delivering a more detailed timeline and numbers.

Patrick Lammers, COO of Customer Solutions at E.On, said, “As early as 2027, we could potentially replace over 200 million litres of diesel with hydrogen”. He added, “Together with Nikola, we will create the first commercially viable market for hydrogen fuel cell technology in Europe.”

Details on how E.On will ensure the hydrogen is green remain outstanding.When first announcing the joint venture, they wanted to make hydrogen available at stationary and mobile refuelling stations and become price competitive over diesel on a cost-of-ownership basis. The joint venture for hydrogen logistics services will start operating beginning of 2023, so Nikola in today’s statement.

At the same time, the company has yet to deliver. The latest business figures saw them far off production targets in the BEV segment and only a few beta-versions of FCEV out on the roads in the US. In Europe, however, Nikola has teamed up with Iveco for production and managed to show a Nikola Tre fuel cell truck prototype this year.

Change in management at Solaris