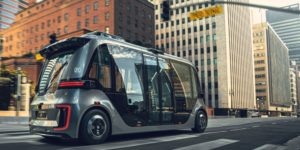 The technology group ZF presents a Level 4 autonomous shuttle at the CES. The new model, for which ZF has already found a partner, will be launched alongside the company’s established shuttle, only each vehicle serves a different purpose.

ZF says it has enough room for 22 passengers, with 15 sitting for the new shuttle now on display at CES. This makes the ZF model slightly larger than Holon’s electric shuttle, which was also unveiled at CES and is designed for a maximum of 15 passengers. At ZF, customers can decide individually on the layout of the seating and standing areas and the interior.

There are also some choices for the electric drive, depending on the use case. With battery options ranging between 50 and 100 kWh, it can currently cover up to 130 kilometres at a maximum speed of 40 km/h (25 mph). Future generations will be able to speed along at 80 km/h (50 mph). Since all four wheels are steerable and the vehicle can be lowered with the so-called kneeling function, the shuttle should be able to “dock precisely and provide barrier-free boarding and disembarking” by reducing the distance to the sidewalk as much as possible.

For autonomous driving, the ZF Shuttle is equipped with lidar, radar, camera and audio systems that provide precise environmental detection, the company says. The data is processed by ZF’s autonomous driving software, called “Virtual Driver”. The Virtual Driver uses artificial intelligence to derive safe driving strategies and passes them on as input to the actuator system. The system is designed with redundancies to guarantee the full functionality and operability of the vehicles, promises ZF.

The new e-shuttle complements the already established autonomous shuttle so that in the future, ZF can draw on two types of vehicle – one primarily for use in segregated lanes and the new model, which will be used mainly in urban environments and mixed traffic. Since the driverless shuttles are available 24 hours a day and seven days a week, public transport operators should be able to provide a mobility service on defined routes even when demand is low and, at the same time – despite an acute shortage of drivers – expand routes, says ZF.

With the US mobility provider Beep, ZF has already been able to win a partner for its new shuttle generation: The agreement covers a planning volume of several thousand vehicles for use in some regions of the USA. Beep, based in Lake Nona, Florida, offers customers access to shared mobility services. Beep has been testing autonomous shuttles for more than three years and has completed more than 100,000 hours of driving. The company operates the largest and longest-running private autonomous mobility network in the US in Lake Nona, Florida. Beep is also a partner to Holon.

Whether the partnership with Beep is a turnaround for ZF’s People Mover is currently open. There were reports that the supplier wanted to part with the business unit or at least look for another shareholder.