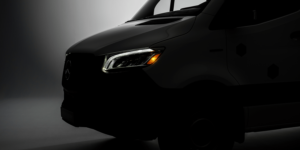 Mercedes-Benz Vans wants to produce and roll out the new VAN.EA electric platform on three continents from 2025. This is to meet the growing demand for electric vans – even if the segment will not become completely electric in the foreseeable future, according to Mercedes’ plans.

“In perspective, we also want to build VAN.EA models at our sites in the USA and China,” Mercedes Vans boss Mathias Geisen told the German publication Automobilwoche. “It is a global architecture.” However, Geisen did not name concrete models or annual figures for the market launch of the VAN.EA models in the USA or China. In the USA, the Sprinter has so far been built as a pure combustion engine model in Charleston (South Carolina), while in China the V-Class is built for the local market in Fuzhou.

The project at the Jawor site in Poland was initially to be built in cooperation with Rivian before the company backed out of the plans. Mercedes is now building the factory there on its own without a partner. “Of course, with the Rivian partner we would have had further cost advantages in the construction and operation of the plant in Jawor,” says Geisen. “However, we made the decision for the business case independently of a possible cooperation.”

Incidentally, the fact that the open-top VAN.EA models are also to come off the production line in Düsseldorf and that Ludwigsfelde will become an e-mobility centre was not a matter of course when the production was being replanned. According to Geisen, this was only possible in the mixed calculation with Jawor.

Even though Geisen, who has been head of the van division since the beginning of 2022, has placed the focus of his strategy on electric mobility, the manager does not expect the combustion engine to be phased out by the end of the decade – as is the case with Mercedes’ passenger car division: “We want to expand our share of electric mobility to the maximum, but the van division will certainly not be completely electric by 2030. However, I assume a share of well over 50 per cent for new vehicles.”